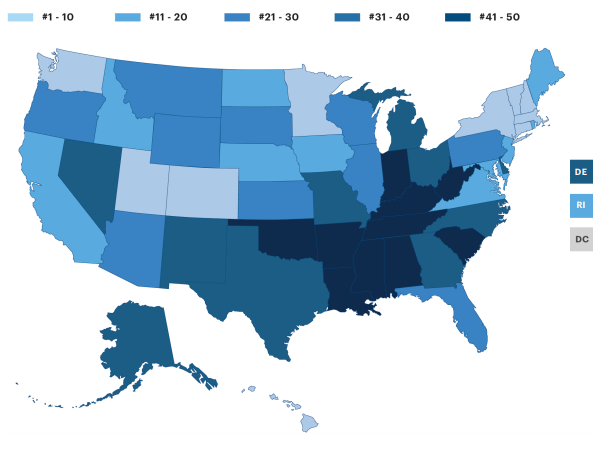 Utah fifth-healthiest state in the nation, according to national report

Utah earned a fifth-place overall ranking in the America’s Health Rankings 2018 report that details health determinants and outcomes across the country. The state has claimed a spot in the top 8 each year since 1990, and fell one spot compared to last year’s report.

To determine the rankings, America’s Health Rankings evaluated 35 health markers within four categories of health determinants: behaviors, community & environment, policy, and clinical care. Health outcomes, which the report says are impacted by those determinants, serves as the fifth category used to determine rank.

Across those five categories, Utah’s rankings varied widely. It ranked first in behaviors, fourth in health outcomes, 11th in community and environment, 15th in clinical care, and 37th in policy.

Utah’s overall first-place finish in the behaviors category was boosted by its low prevalence of smoking and excessive drinking, as well as its high rankings for physical activity and relatively low prevalence of obesity. Those combined scores were enough to overcome less-impressive rankings of 40th for drug-related deaths and 27th for high school graduation. The state’s high school graduation rates are improving, the report notes, having increased 12 percent in the last five years.

Utah ranked well for several other determinants; its relatively low percentage of children in poverty and percentage of adults with diabetes put it in the top two for both categories, and the number of preventable hospitalizations and number of cancer deaths in the state ranked it in the top two for those categories, as well — though the report also notes that cancer deaths in Utah have increased by 6 percent over the last five years.

Other notable trends included in the summary of Utah’s data landed on the side of positive progress: The percentage of adolescents with the meningococcal immunization in adolescents increased 40 percent in four years, and the number of mental health providers increased 8 percent in the last year.

However, some trends weren’t as desirable: The number of chlamydia cases increased 43 percent in the last seven years, and the percentage of live births with low birthweight increased 4 percent in the last five years. The report also mentions that Utah had the second-highest increase of cardiovascular deaths in the country, though it ranked 19th overall for 2018.

The data also revealed several specific challenges for the state in 2018. Among them: Utah ranks 49th for its rate of primary care physicians, 47th for HPV immunization coverage among adolescent females, and 42nd for the number of Pertussis cases.

Policy, where Utah ranked 37th, was the state’s worst overall category in terms of performance. For almost every policy-related determinant, including HPV immunization coverage, Utah’s ranking hovered in the 30s and 40s. 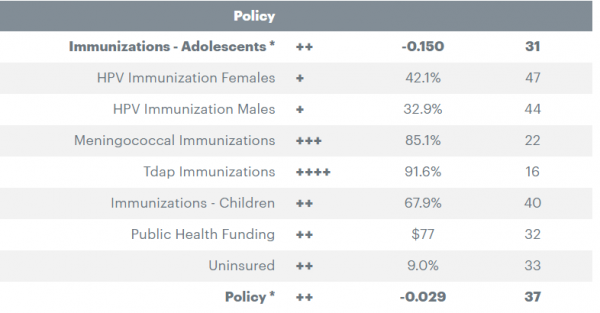 Given those specific, policy-related challenges, it would seem that the Utah data would be especially helpful in informing policy discussions, which is one of the goals of the report.

“Policy-makers, public health officials and community leaders are encouraged to leverage this report and resources across the America’s Health Rankings platform to better understand the progress and challenges within their states and across the nation,” the report states.