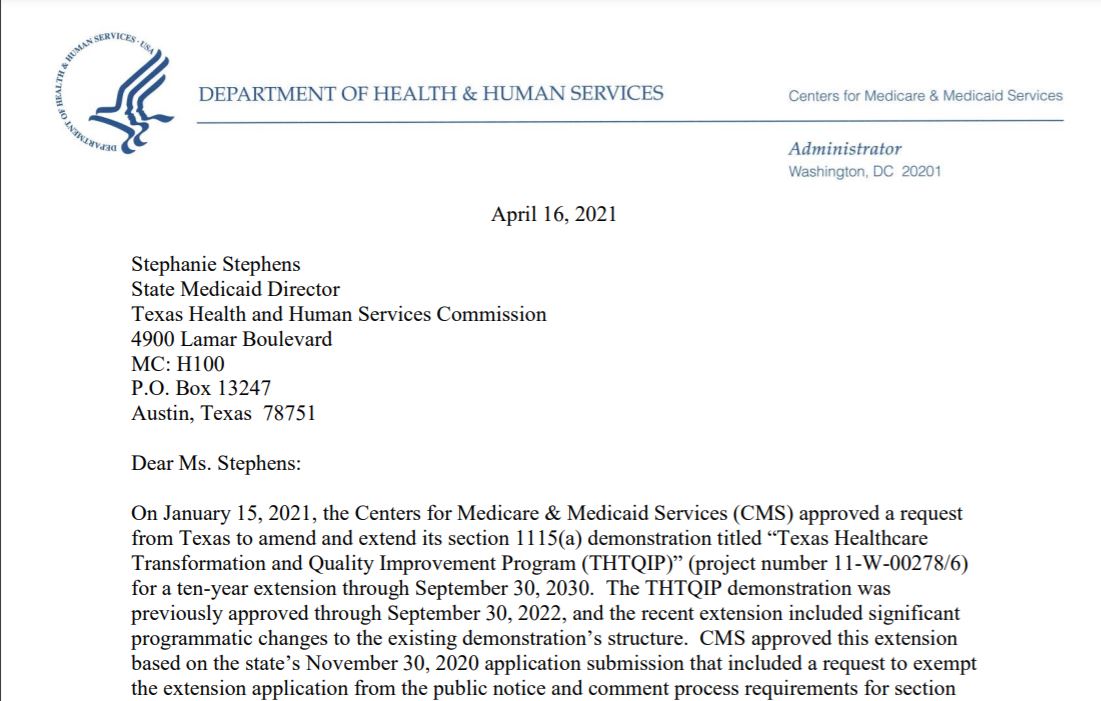 Last week’s news that the Biden administration was rescinding the 1115 waiver extension the Trump administration had granted Texas was felt from California to Florida, and certainly throughout the Lone Star State.

Austin was buzzing with the implications for the state, a reality that only began to settle in on Monday as staff at the Texas Health and Human Services Commission (HHSC) were able to make sense of the 669-page transmission.

Here is an excerpt from the Centers for Medicare and Medicaid Services’ (CMS) announcement on Friday:

“While the Delivery System Reform Incentive Payment program is being phased out in September 2021, the waiver extension would have allowed the state to develop and implement directed-payment programs for Medicaid-managed care services to improve quality and access, stabilizing Texas’ health care safety-net while providers are continuing to respond to the ongoing public health pandemic. Examples of new directed-payment programs would have included funding to hospitals, physicians, rural health clinics, and community behavioral health providers.”

Yes, the waiver will remain in place through September 2022. But a primary element of the waiver that caused the greatest amount of concern for health care and health policy leaders is the Delivery System Reform Incentive Payment (DSRIP) program.

With CMS’s action, that DSRIP program is set to sunset in less than six months at the end of September 2021.

When that program goes away, so will billions of dollars Texas has relied on in recent years to fund Medicaid services.

Put differently, without those funds, hospital rates will fall, ER use will increase and hospitals will receive fewer funds to support uncompensated care.

The Abbott administration has tried to extend the funding currently provided by DSRIP.

HHSC submitted a request for a $2.49 billion, 1-year extension of DSRIP on October 16, 2020. However, the Trump administration was not willing at that time to grant an extension.

In fact, it was the Trump administration that specifically required a “sunset” provision of the DSRIP funds with an expiration date a year prior to the expiration of the full waiver.

CMS’s thinking, as conveyed by former HHSC officials, was to give Texas a “runway” to come up with a different option for funding uncompensated care and hospital reimbursement before coming back to CMS for a full waiver extension.

After President Trump’s election loss, however, Texas applied for a full waiver extension on November 30, 2020,  just shy of two years before the waiver was set to expire.

The extension request asked for a five-year extension of the existing waiver. According to a brief provided by Every Texan, a social justice non-profit and one of the organizations to write to CMS with a request that the waiver extension be rescinded, the extension didn’t add many new components to Texas’s Medicaid system. Texas did request an expansion of the “uncompensated care” pool of funds, and a new “Charity Care Pool” for public health providers.

This time, however, the Trump administration was more willing to provide support to Texas. It provided a 10-year approval period instead of the 5 years that Texas had requested. It also allowed Texas to use a “fast track” process for review. While the “fast track” process is a useful tool for many states in this predicament, according to Every Texan’s brief, the rules for the process specifically exclude consideration of “Uncompensated Care pool extensions.”

The Biden administration first put states like Texas on notice 8 days into the new administration that their waiver would be reviewed. In an Executive Order on Jan. 28, President Biden directed agencies to review “demonstrations and waivers under Medicaid and the ACA that may reduce coverage or undermine the programs, including work requirements…”

For some Texas hospitals, this might be too much to try to overcome.

According to the Texas Organization of Rural and Community Hospitals (TORCH), 26 Texas rural hospitals have closed since 2010, 37% of the nation’s total. John Henderson is the CEO of the organization. In comments first provided to State of Reform in February 2020, Henderson said the elimination of DSRIP would put a majority of Texas rural and community hospitals out of business.

“Forty-six percent of rural Texas hospitals have negative operating margins and you can’t exist for long when you do that, so we’re just trying to get them back to even.”

On Monday, Henderson reiterated his point in a comment to State of Reform.

“Losing billions of dollars in uncompensated care funding for Texas would be a disaster, particularly for small, rural hospitals who have negative margins even with these funds.’

Taken together, Texas policymakers now seem to have a set of politically difficult options with which to stabilize hospitals in the state.

Doing nothing is likely to eviscerate the Texas health care system starting in September. That’s never good. It’s even worse in a never-ending pandemic.

Going back to CMS with the same extension model is less likely to be successful now than it would have been with a Republican president. Moreover, the comments from stakeholders are not likely to be uniformly positive for the Abbott administration. Many stakeholders will simply call for Medicaid expansion.

It’s not clear that Texas will get any new money by simply resubmitting its current waiver. In fact, federal rules generally require a budget neutrality reset in these considerations which specifically preclude new funds for existing service delivery models.

So, without a clear pathway to maintain Texas’s hospital safety net, and with the clock ticking, the Legislature is likely to be forced to come up with a near-term budget appropriation to make it through until a new waiver can be negotiated.

This means the Legislature will need to figure out how to spend more state funds on Medicaid to keep providers afloat. This is where things get even more difficult.

Generally speaking, the federal matching contribution (FMAP) can only go to costs that are actuarially sound. Moreover, once a benefit is added, it is often very difficult to remove the benefit, depending on what benefit is added (required versus optional).

What this means is that the easiest way to make up a big shortfall is for Texas to cover all of the costs to uphold these new benefits. California often does something similar, paying for services out of general fund dollars without any positive FMAP contribution.

However, that is the most expensive option. And, for a state like Texas that has consistently relied upon federal dollars to offset state investment, that’s an unlikely scenario.

That leaves one other option — have the feds pay for almost all of the shortfall in uncompensated care the way 38 other states do: expand the Medicaid program to draw down over 90% of the cost from the feds.

That is not politically palatable among Republican legislators, either.

But those are the three primary options on the table:

There are 47 days left in the Texas legislative session. Get your popcorn.