A handful of bills dedicated to improving maternal health have been referred to the Senate Health & Human Service Committee since the start of the legislative session. These bills, which focus on postpartum care, are in response to Texas’s high rates of maternal mortality.

In 2016, the journal Obstetrics and Gynecology released a study showing that Texas had the highest maternal mortality rate in the country, and that it had doubled over a two-year time span. Though researchers at the Texas Department of State Health Services (DSHS) ultimately determined the maternal mortality rate to be inflated, the state has continued to make the issue a priority.

SB 147, introduced by Senator Jose Rodriguez, would extend medical assistance through Medicaid for 12 months after delivery or miscarriage. Currently, eligible women in Texas are covered for 60 days postpartum through Medicaid, resulting in a gap in coverage.

According to the 2018 Maternal Mortality and Morbidity Task Force and DSHS Joint Biennial Report, 57 percent of maternal deaths from 2012-2025 were women who were on Medicaid at the time of delivery. The report also shows that most maternal deaths take place 61 days or more postpartum – after Medicaid coverage has ended.

Another bill we are watching, SB 307, would specifically extend behavioral health services for women on Medicaid for 12 months after delivery or miscarriage.

“I think we have a unique opportunity this session in dealing with postpartum benefits,” said Representative Sarah Davis, during a recent keynote discussion at the 2019 Texas State of Reform Health Policy Conference. “There is bipartisan support for expanding, or extending, the Medicaid benefits.”

When asked about the possibility of extending Medicaid coverage in general, Davis replied,

“I’m really thinking that focusing specifically on the maternal mortality component is where we might find the most success.”

The third bill we’re watching, SB 436, would require DSHS to develop and implement a series of initiatives aimed at improving maternal and newborn health for women with opioid use disorder.

The bill suggests initiatives to improve opioid use disorder screening, encourage provider referrals to treatment, increase access to medication-assisted treatment both during pregnancy and postpartum, as well as reduce the number of opioids prescribed before, during, and after pregnancy.

The 2018 DSHS and task force report found that drug overdose was the leading cause of maternal death in the year after delivery. Of the 64 deaths due to drug overdose from 2012-2015, opioids were found in 58 percent of the cases. 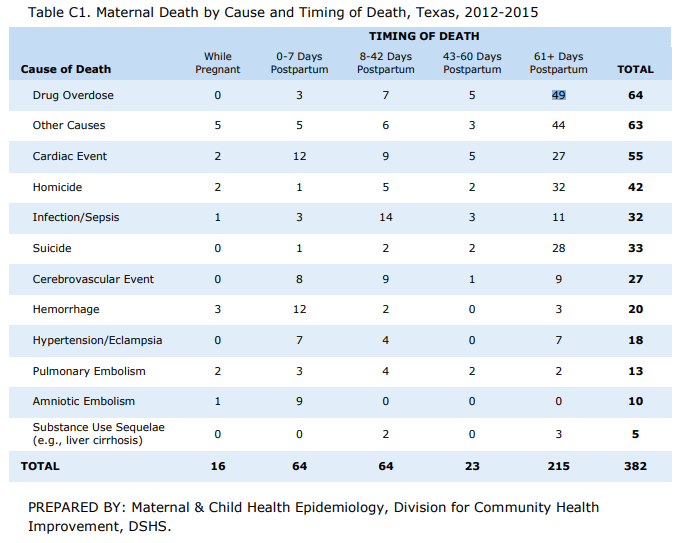 All three of these bills have been referred to the Senate Health & Human Services Committee, but none have a public hearing scheduled.