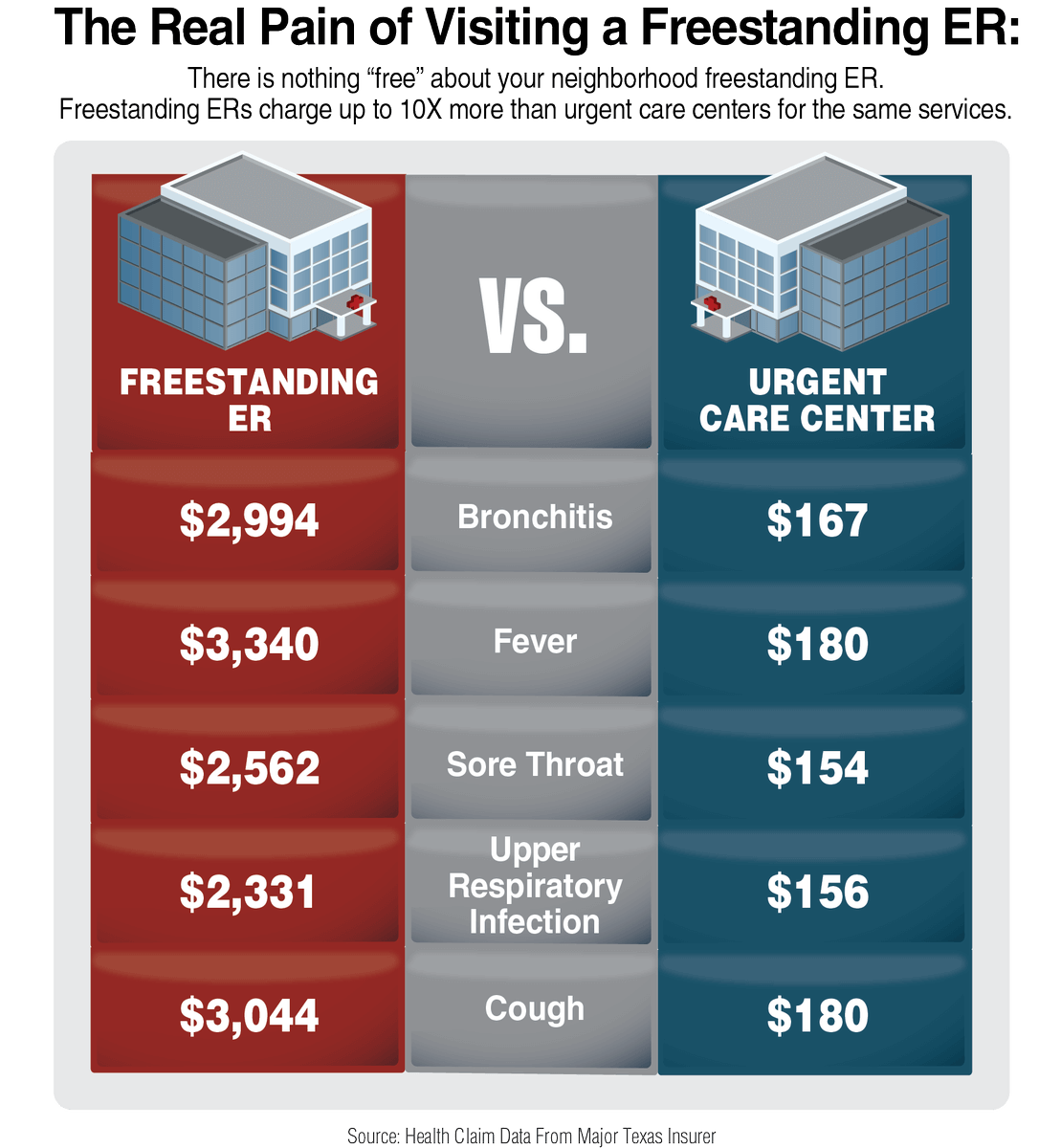 The war against freestanding ERs

With all the attention in Austin on state budget battles, Medicaid, and the impact of changing the ACA, there has been little attention on the steady legislative push against freestanding ERs in Texas.

For months we’ve heard consistently from a number of stakeholders, including consumer advocates, health insurers, and even some providers that the explosion of freestanding ERs in Texas is a big problem…for everyone but the freestanding ERs. The list of critiques against free-standing ERs is long (see here, here, and here for examples).  In response, freestanding ERs not affiliated with a hospital have banded together to form their own association — an interesting statement about their proliferation in large numbers in and of itself — including a FAQ to explain what they do. Seeing the pushback against their growing industry, they’re also making their case publicly as the legislature increasingly casts an eye on them:

Shorter wait times are another advantage offered by FECs [freestanding emergency center]. When a patient arrives at a traditional hospital ER, they often face long wait times seeing a physician. Sitting in a waiting room for hours without receiving medical attention allows symptoms to worsen; studies have shown that as hospital wait times for patients increase, so too does patients’ risk of death.

By having FECs as an alternative to hospital-based ERs, we can address the symptoms created by hospital closures and overcrowding, while simultaneously reducing the costs of health care, lowering admission rates and providing exceptional patient outcomes.

A number of members of the Legislature appear not to agree. Senator Hancock’s bill on balance billing continues to move forward, with Hancock citing the freestanding ER issue:

At the committee hearing on SB 507, we heard the personal stories of Texans who received huge, out-of-pocket medical bills for emergency treatment despite having checked with the health care facility to make sure their insurance would be accepted. That just isn’t right. Medical billing shouldn’t be this confusing.

Hancock’s legislation appears to have momentum, including a unique coalition of supporters. We think among those, it’s the business community taking a strong position on the issue, via the Texas Association of Business, that elevates the debate beyond the stereotypical health insurer vs. provider squabble:

Texas’ well-deserved pro-business reputation is being threatened by rising health care costs. Texas – along with Wisconsin – spends more per capita on health care than any other state in the country, according to a recent report from the Health Care Cost Institute. Texans are also burdened with the highest out-of-pocket spending for their health care needs.

The rapid proliferation of high-cost, stand alone emergency rooms throughout the state is making the problem worse.

That may be a reason why Senator Hancock has more legislation targeting freestanding ERs, and he’s not the only one as the last bills went into the hopper before the bill filling deadline including a number of others on the freestanding ER topic as well.

What will come of all that? Tough to say. But health insurers are clearly motivated on the topic. Leaders across that industry regularly bring up the issue when discussing their current priorities. The Texas Association of Health Plans has a page devoted to the topic and their Twitter page is full of activity on the topic, including this pinned tweet at the top of their page on Hanckock’s SB 507:

We applaud @KHancock4TX for the intro of #SB507; which significantly expands protections for TX consumers against surprise billing. #txlege pic.twitter.com/Cj5SKQK6Cs

Moreover, the association is also leading a coalition behind Texans for Affordable Health Care, which is currently focused exclusively on the freestanding ER issue, with activity on Facebook and Twitter to raise awareness on the topic, including the impact on consumers:

All this energy on one topic gives off the appearance of a sustained counteroffensive by the health insurance industry against freestanding ERs, not just a single legislative push. One of the largest insurers in Texas, Blue Cross Blue Shield, was weighed in publicly, expressing specific concern about the impact on patients and other health care providers:

Thx @txhealthplans – as a doc who practices in an ER I worry about potential for fraud, waste & abuse plus the weakening of our hospitals https://t.co/NS1doaypVW

What will come of all of this? Some legislation will no doubt pass, but that likely won’t be the end of things. The sum of this activity points to a sustained effort by an interested coalition to educate consumers and businesses about freestanding ERs, with those freestanding ERs in turn fighting back. It’s inevitable given the growth of the industry. A trip through more affluent parts of the Dallas Fort Worth area yield no doubt that the freestanding ER business is alive and booming, startlingly so. We at State of Reform have seen no local market like it across the diverse states we work. Things are so robust for freestanding ERs in the area that there could soon be one on DFW airport grounds.

Whatever happens with the freestanding ER issue itself, it’s all a reminder that despite all the debates today about how people access and afford health care coverage, the stubborn issue of rising health care costs that are the underlying driver of the cost of coverage itself remain an issue the health care system is far from solving.