What would a TABOR repeal mean for the status of Colorado health care?

This week, the Colorado Supreme Court ruled that a full TABOR repeal could move forward.

The Taxpayers Bill of Rights, known as TABOR among Coloradans, was passed by voters in 1992, and limits the amount of money that the state can retain and spend. The base limit must be equal to or less than the prior fiscal year’s revenue limit grown by Colorado inflation and population growth, or the current fiscal year’s revenue. It is a special formula: annual inflation rate + percentage change in the state’s population = the amount that state revenue available for expenditures can increase.

The TABOR limit also requires voter approval for any tax increases in the state. Voter approval is also required to increase this base limit, which puts constraints on state and local tax income. In 2005, voters approved Referendum C, which temporarily allows the state to save and spend above the baseline figure. Surplus revenue must be returned to Colorado taxpayers. This temporary time allows the state to invest in areas they were previously restricted from doing so. 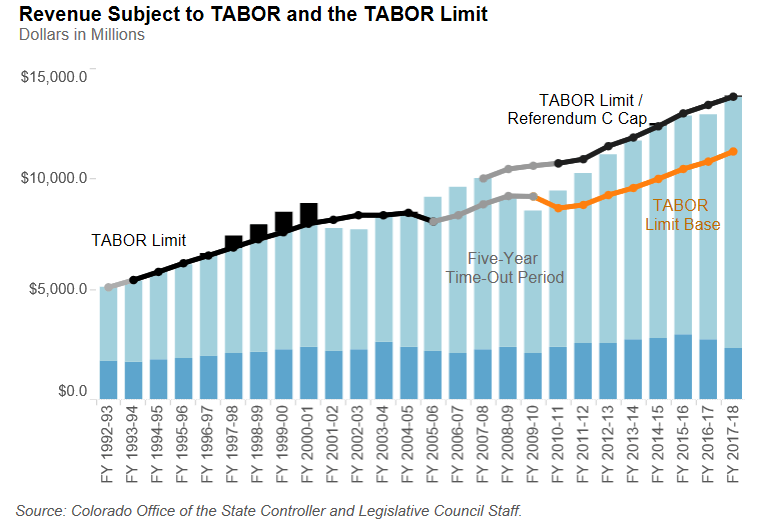 TABOR is a partisan topic. Some attribute the economic success of the state to its passage, while others believe that TABOR puts too many restraints on government spending and is directly to blame for the lack of funding for services that are most important to the state. While repeals have been attempted in the past, the decision made on Monday marks an important season of debate for Colorado.

Here is how TABOR has impacted Colorado health care:

Colorado’s public service national rankings have decreased considerably since the passage of TABOR. In education, for example, Colorado fell from 35th to 49th in K-12 spending. And, also fell to the bottom of national rankings for providing school-aged children with vaccinations. During the 2001-2002 school year, the state suspended their vaccination program because it could no longer afford the vaccinations.

Between 1992 and 2005, directly following TABOR’s passage, the number of children without health insurance doubled.

The decrease in spending, and in national rankings in areas like health care have forced legislators to come up with clever “work-arounds” to generate more money for public services. Perhaps the most notable case of this is the hospital provider fee.

Passed in the legislature in 2009, the hospital provider fee (HPF) is a Medicaid funding mechanism that allows the Department of Health Care Policy and Financing (HCPF) to collect fees from Colorado Hospitals. These fees are then matched by federal funds and distributed to hospitals. These increases in payments to hospitals allows more Coloradans to receive health care via CHP+, the Medicaid program for pregnant women and children.

During the 2017 legislative session, another bill, SB17-267 created CHASE, the Colorado Healthcare Affordability and Sustainability Enterprise, ending the HPF. Enterprises to not count towards the TABOR limit. Because CHASE was established as such, the revenue generated was not eligible for TABOR limits.

“With this ruling, Medicaid is able to pay higher reimbursements to hospitals, which is especially important to rural hospitals,” said Kim Bimestefer, executive director for the Department stated on the state’s official website. “The second thing it does is continue funding both the Medicaid and CHP+ expansions which helped lower the uninsured rate to 6.5%. Just those two things – lower uninsured rate and increased hospital reimbursements – are powerful drivers of the economy while allowing us to take care of people who need it most.”

So, what would a TABOR repeal look like and how would that impact health care?

The main argument against TABOR is the crippling effect on the economy and public services, as data has shown. But, this session, Colorado’s booming economy and economic surplus allowed for record-breaking investments in public services that have been hit hard in the past. Transportation and infrastructure, for example, along with education, received more money this year than in years prior. And, with the recent ruling deeming the HPF legal within TABOR’s limits, it is likely that it is here to stay.

Given the status of the economy with the workaround and recent economic success, it will be difficult to claim TABOR has decimated Colorado’s economic standing.

Lawmakers have also become savvy with work-arounds, and if the HPF is any indication of future attempts to keep revenue outside the base limits, it is likely that other attempts will be made successfully in the future.

The TABOR repeal is likely to heat up this summer, with policy alternatives created to replace it.