In December, Premera Blue Cross Blue Shield granted two years of funding to the Alaska Resilience Initiative (ARI) to develop a program to train professionals in recognizing and responding to trauma and adverse childhood experiences (ACEs).

The Alaska Resilience Initiative is a statewide organization that brings together a variety of groups and individuals with the goal of ending child maltreatment and systemic trauma. The ARI works to develop solutions to systemic trauma in Alaska while also serving as a network builder and advocacy group.

ACEs are damaging early childhood experiences that impair a child’s development and have long lasting effects into adulthood. Examples of this kind of adversity include poverty, physical or sexual abuse, neglect, or a household member addicted to substances. When experienced in the first few years of life, these experiences can result in higher rates of physical health, mental health, and social problems.

Laura Norton-Cruz, the Director of ARI, says these experiences are especially problematic in Alaska.

“We have a larger percentage of residents who have experienced a high burden of adversity in their childhood.”

According to the Behavioral Risk Factor Surveillance System (BRFSS), more than two thirds of Alaskans report experiencing one or more ACEs, and nearly a quarter of Alaskans have experienced four or more. Alaska also ranks high in child abuse and neglect per capita and the rate of alcohol abuse and suicide is twice the national average. 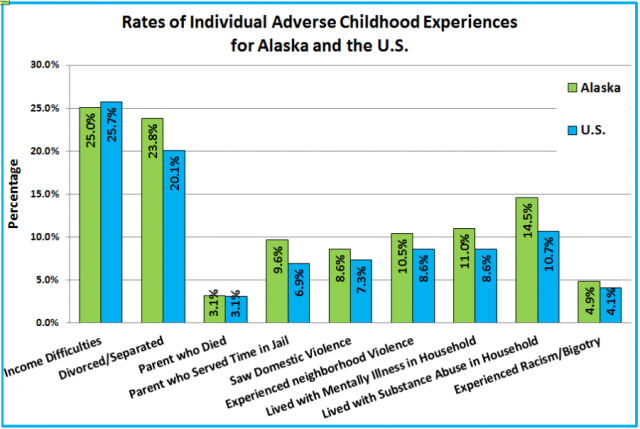 Norton-Cruz says the funding from Premera Blue Cross Blue Shield will be used specifically to create, pilot, and analyze training programs in the education and healthcare sectors. The goal of these trainings will be to identify individuals impacted by trauma and ACEs and come up with better ways to work with them.

“The education version of the curriculum is going to talk about, what does this look like in the classroom and what do you do about it in a school setting?” The health care version will look at how does this come up in primary care or emergency medicine or pediatrics, and what can you do about it?”

Norton-Cruz says the ARI plans to evaluate not only what kind of training is most effective for educators and health care workers, but also how much training and how often. She also says even a single training can have a positive impact in the classroom and in health care.

“The thing that even a single training can do is that it provides a paradigm shift. Kind of most profoundly it provides a shift in the lens from, “What’s wrong with you kid? What punishment can I heap upon you to get you to stop doing this behavior?” And moves more towards, “what happened to you and what is happening with you right now?”

Norton-Cruz says the goal is to have the first draft of the curriculum done by the end of February, and then do as many pilot presentations as possible in March and April in order to being preliminary evaluations.