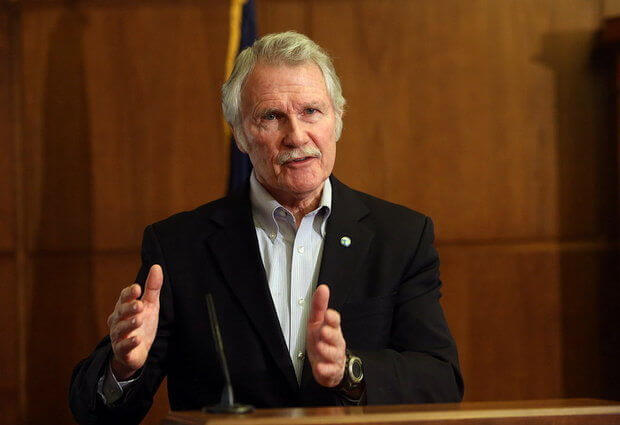 The American Federation of Teachers, a union representing 1.7 million members across the county, recently published the first edition of their new health care journal. The journal leads off with an essay from former Oregon Governor John Kitzhaber titled, “From Public Health Crisis to Healthcare Evolution,” which offers his take on the how the United States can utilize this moment to move toward a health care system focused on value and health.

Early in his career as an ER doctor, Kitzhaber noticed that he “was treating the medical complications of social problems.” Rather than supporting wellness, he found that the United States’ health care system was designed to profit from illness. This, he says, is a result of our health care system’s underlying business model.

During the Great Recession, Kitzhaber led the charge in developing a new model for care delivery for Oregon’s Medicaid enrollees. Through coordinated care organizations (CCOs), the state shifted focus to whole person health rather than just treating illness, says Kitzhaber.

“The CCOs don’t just treat illness; they cultivate health by addressing not only physical, mental, and dental care but also related needs such as safe housing, transportation, and fresh, affordable food. CCOs have also demonstrated that it is possible to expand coverage and reduce the rate of medical inflation while improving quality and health outcomes,” he wrote.

He says that with the economic downturn brought on by the COVID-19 pandemic, now is the time to expand this kind of model across the country.

A key to moving toward a new model focused on health and wellness is to shift our focus to value, says Kitzhaber. The United States spends 18% of its GDP on medical care, but does not dedicate adequate funding to factors that have the greatest impact on health such as decent housing, good nutrition, safe communities, education, and other social determinants of health.

“If we could reduce our healthcare spending from 18 to 12 percent of GDP (which is the average spent by most other industrialized nations), we would free up over one trillion dollars a year to invest in the things that contribute more to health. Such a reduction in spending might seem impossible, but successful examples of how to bring down the total cost of care do exist, including Oregon’s CCOs,” writes Kitzhaber. “Under these care models, providers receive a fixed amount of money (a global budget) to provide quality care with good outcomes for a defined population; if the global budget is exceeded in any given year, the providers are at financial risk for the difference. These care models change the system’s incentives from rewarding sickness to rewarding wellness—and they work. Because they focus on improving health, they prevent illnesses and thereby reduce costs without sacrificing quality.”

One obstacle keeping the US from moving toward a new system focused on value and health, says Kitzhaber, is the way the political debate is framed. He says Republicans and Democrats have not seriously challenged the health care business model and as a result, the national health care debate is paralyzed.

“In the wake of the Affordable Care Act, both major political parties have continued to debate only the extent to which we should fund the system, creating a false choice between cost and access. This false choice is reflected in the Republican view that the cost of healthcare is unsustainable and must be constrained, and in the Democratic view that any reduction in spending will result in a reduction in access. Both sides are right, if they remain wedded to the current business model. Republican proposals to “repeal and replace” the Affordable Care Act, for example, would simply reduce the public subsidies in the current business model, increasing the number of uninsured Americans and exacerbating the inequity that already exists. Democratic efforts to expand coverage through proposals like Medicare for All would significantly increase public subsidies but within the same inflationary fee-for-service business model, adding to the burden of debt that future generations will have to pay. To put it another way, Republican proposals increase inequity and harm people today; Democratic proposals increase the debt and harm people tomorrow,” he writes.

To move away from a system that profits from illness, we must create a new incentive structure that rewards health, he says. This involves moving from fee-for-service models to capitated payment models. It also means providers must be held accountable for meeting quality and outcomes measures.

Oregon’s CCO model proved that these changes were possible and effective, but it only focused on Medicaid.

“To truly address our healthcare and health crises, the United States needs a holistic approach that extends the new health-focused model into the commercial market,” writes Kitzhaber.

This kind of system can take many forms, says Kitzhaber, but it must include the following 5 elements: universal coverage; defined benefits; assumption of risk by providers and accountability for quality and outcomes; capped total cost of care through a global budget indexed to a sustainable growth rate; and cost prevention by addressing the social determinants of health.

“Effectively addressing the access, value, and cost issues in our healthcare system is one of the most important domestic challenges we face as a nation. Doing so, however, requires both a clear-eyed assessment of what this system has become and the courage to challenge that system. The global pandemic, with its profound economic and social consequences, has brought into clear focus the urgent need for a new model more aligned with caring, compassion, and the goal of improving the health of our nation.”