Oregon Medicaid enrollment increases by over 100,000 since March

On March 9 there was a total of 1,079,613 OHP members. Since then, enrollment has increased every month. Just last week, OHP membership increased by 4,016 individuals, representing a 0.34 percent increase compared to the previous week. 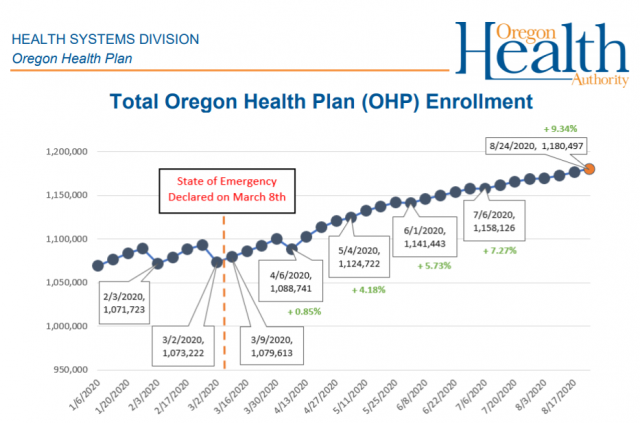 About 25% of the additional members are due to new Medicaid enrollments. Most of the increase in OHP membership, however, is due to a policy change aimed at maintaining Medicaid coverage during the pandemic.

This policy paused the disenrollment of most individuals during the COVID-19 emergency. It allows individuals receiving benefits on or after March 18 to remain enrolled except for in cases of deaths, incarcerations, out of state residency, or voluntary benefit closure.

“Since the end of March,” says the Oregon Health Authority, “people exiting the program decreased by around 75 percent from 20,000 people a month to about 5,000 a month.”

Other recent policy changes are making it easier to enroll in the Oregon Health Plan. OHA is currently accepting self-attestation of criteria necessary to determine eligibility without additional verification. Another policy change ensures that federal stimulus payments and increased unemployment payments are not counted toward income during this time.

“Adults eligible for OHP through the Affordable Care Act have made up about 60 percent of the program’s growth, and children covered by Medicaid account for about 25 percent of the growth,” added OHA.

OHA says the 6.2 percent increase in federal Medicaid matching funds provided through the passage of the Families First Coronavirus Response Act is projected to cover Oregon’s Medicaid enrollment increases through the end of the year.