The Oregon Health Authority’s COVID-19 Weekly Report released Wednesday shows a spike in COVID-19 cases in the state. The OHA data shows an 18% increase (353 cases) in new cases for the week of May 25 – May 31 compared to the previous week.

Prior to this report, Oregon experienced two weeks in a row of declining reported cases.

Using data from state health departments and the COVID Tracking Project, Axios is tracking changes to 7-day averages of new cases for all 50 states. Their data also shows a spike in Oregon cases.

Based on data from May 26 and June 2, Oregon is one of three states in the nation (with more than 15 cases/day) experiencing a 50% or greater increase in new cases. Axios reports Oregon’s 7-day average jumped from 34.4 new cases on May 26 to 52.6 new cases on June 2, indicating a 53% increase. 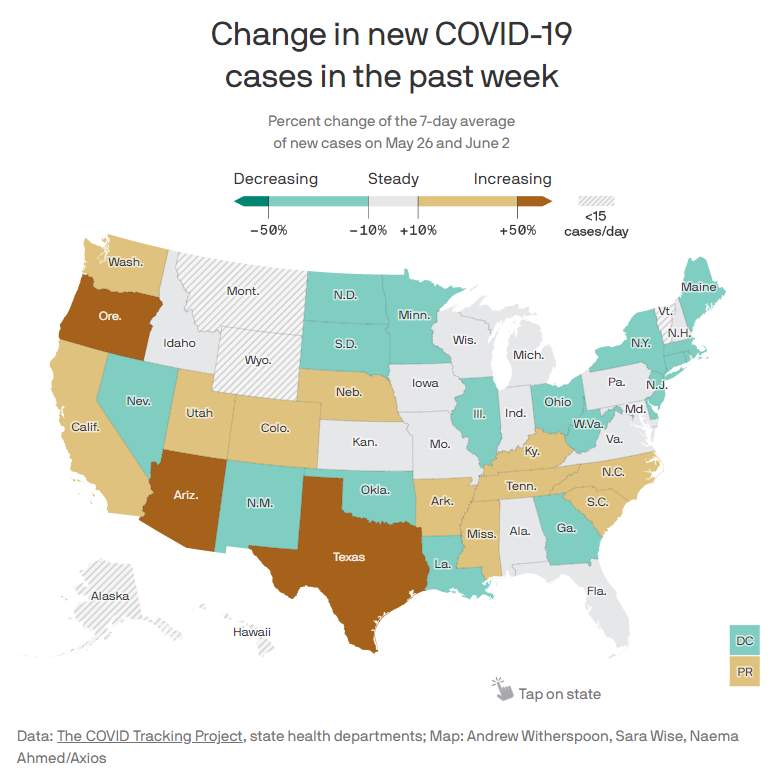 However, both OHA and Axios note that improved testing can cause the number of identified cases to rise in a specific state even if that location’s outbreak isn’t getting worse.

“At least some of the modest recent increase can be attributed to increased testing. However, the slightly higher percentage of tests that are positive suggests either a small uptick in COVID-19 incidence or that testing is more focused on people who have had an exposure or have symptoms and less on the “worried well” who have neither. Public health officials will be monitoring this closely,” reads the report.

“Oregon’s goal is that 95% of case-patients will be engaged by a contact tracer within 24 hours of receipt of the case report. If this goal is achieved, substantially more cases will be linked to a known case, and a greater proportion of all cases will be identified and tracked to minimize further spread of COVID-19,” reads the report.