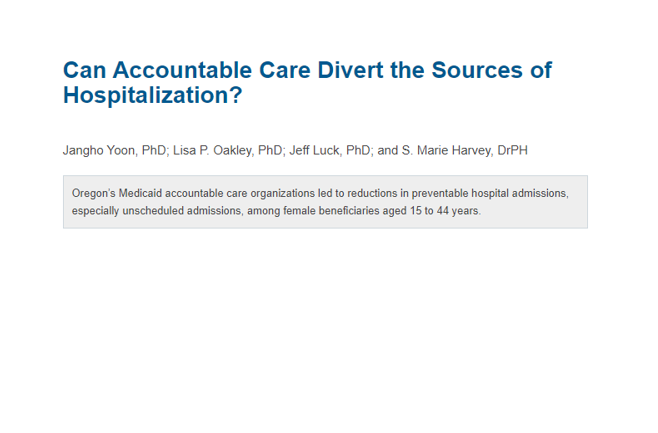 The study suggests the Oregon system of coordinated care organizations, or CCOs, which have been serving Medicaid enrollees since 2012, can provide lessons to other states regarding the three-pronged pursuit of better health, better care and lower cost.

Among all types of patients, privately and publicly insured as well as the uninsured, hospitalizations account for nearly one-third of U.S. health expenditures, so reducing them in ways that don’t compromise care is an important goal.

“Between 2003 and 2009, elective hospital admissions remained stable, but non-elective admissions grew from 25.3 million to 26.7 million,” Yoon said. “And hospitals’ emergency departments have become the primary gateway to inpatient care.”

Oregon is one of 13 states with an accountable-care system for Medicaid patients and is considered to have implemented the most progressive model of accountable care.

Yoon and collaborators from the College of Public Health and Human Sciences analyzed Oregon Medicaid eligibility files from 2011 to 2013 for more than 86,000 women ages 15-44, looking at total hospital admissions: scheduled, unscheduled and preventable.

“The accountable-care model implemented for Oregon Medicaid enrollees led to a decrease in preventable hospital admissions in the study group,” Yoon said. “That suggests the Oregon model, which emphasizes primary care and care coordination aligned with strong financial incentives on provider care coordination, may promote more efficient use of resources in the health care system.”

The Centers for Disease Control supported this research, and findings were published in the American Journal of Managed Care. The journal’s editors double-checked all of the numbers in the paper, Yoon said, and also collaborated with the researchers on terminology.

This press release was provided by the Oregon State University College of Public Health and Human Services.