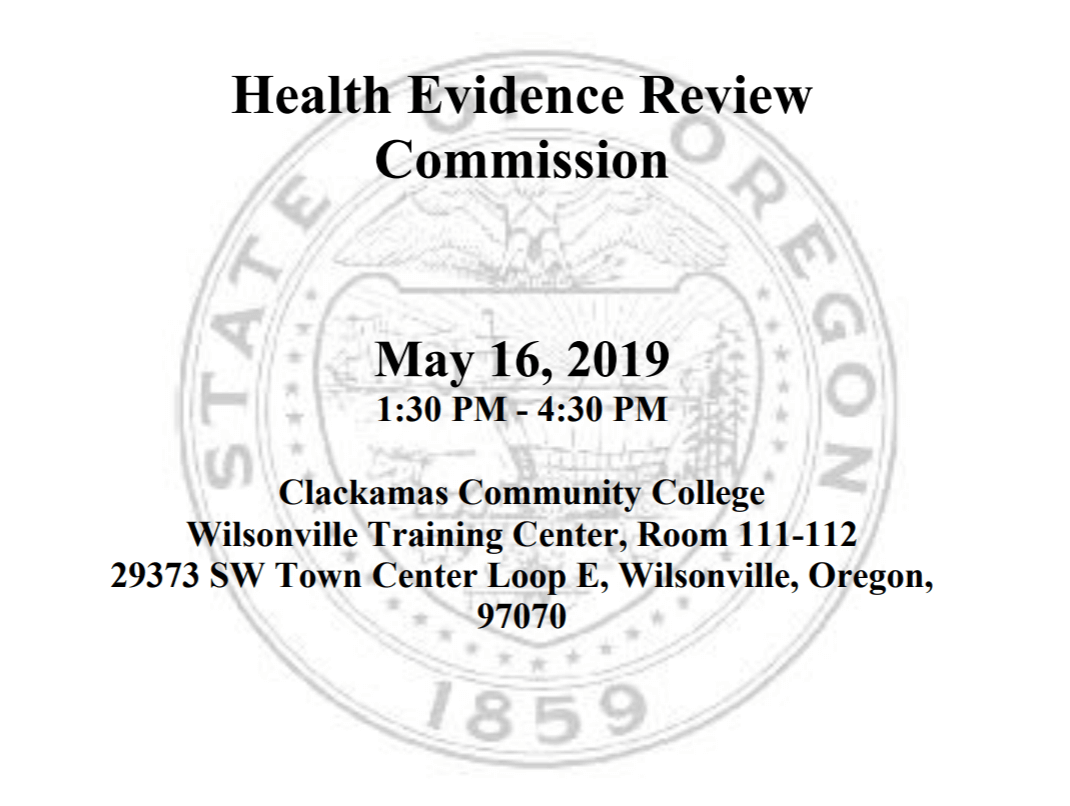 On Thursday, Oregon’s Health Evidence Review Commission (HERC) tabled a recommendation to expand Medicaid coverage to patients with five specific chronic pain diagnoses. The commission also voted to scale back recommendations for existing guidelines regarding opioid tapering for patients with neck and back pain.

HERC, a 13-person commission appointed by the governor and confirmed by the senate, is tasked with guiding the Oregon Health Authority (OHA) in making decisions related to benefits. It submits a biennial report to the Legislature and Governor that includes the “Prioritized List of Health Services,” ranking health services by priority for the next two calendar years.

The proposal to expand coverage to specific chronic pain conditions in the report for the 2020-21 biennium was brought forward by the Chronic Pain Task Force and shared with the Value-Based Benefits Subcommittee in an August 2018 meeting, then updated in March.

The most controversial part of the proposal involves opioid tapering. The expansion of coverage would make patients with those five conditions subject to the same opioid-tapering guidelines as patients with neck and back pain.

In 2016, Oregon set guidelines for coverage of back and neck pain that required tapering those patients’ usage of opioids to zero by January 2018. The Task Force’s August proposal recommended making the five chronic conditions subject to those guidelines, removing the 2018 deadline, and instead requiring patients receiving long-term opioid therapy to have an individual treatment plan that includes a taper “with an end to opioid therapy no later than one year” after starting to taper.

The proposal “garnered considerable concern and attention from advocates, providers and experts across the country,” OHA wrote in a press release about Thursday’s meeting.

An updated proposal introduced in March included opioid coverage through an “individualized taper plan” that had to include cessation, but could be slowed or paused. It didn’t include a deadline.

Dr. Sean Mackey, Chief of the Division of Pain Medicine at Stanford University, submitted a letter to HERC laying out concerns about the updated proposal, to which several health professionals signed on.

“We appreciate HERC’s efforts to revise its original proposal in ways that better balance the need for appropriate opioid stewardship with patient-centered care,” Mackey wrote. “Nevertheless, we continue to have grave concerns with the primary goal of the current proposal, namely, its call for non-consensual forced tapering off prescription opioid analgesics of a broad class of patients.”

The letter said HERC’s proposal “contradicts all of the relevant North American guidelines for opioid prescribing.” Mackey had written a similar letter in response to the December proposal.

“The past year has been a valuable learning experience for OHA and the HERC,” said Kevin Olson, M.D., HERC chairman, in a press release ahead of the meeting. “Not only will we apply what we learned to the chronic pain proposal currently under consideration, we feel there is enough new evidence to reopen the 2016 back pain guidelines to ensure our policies align with our best understanding of clinical evidence. I want to thank the advocates and experts who have voiced concerns and directed our attention to new information.”

The Oregon Health Authority commissioned Aggregate Analytics Inc. (AAI) for an external review of the evidence on which the proposal was based, evidence submitted by the public and experts, and how it all aligns with coverage changes the proposal would make.

Dr. Andrea Skelly, President and Senior Epidemiologist at AAI, presented its findings at Thursday’s HERC meeting. Among other conclusions, the review found that evidence supporting many of the chronic-pain interventions was sparce, and that the quality of evidence for opioid tapering was “very low.”

Ultimately, the commission had to choose one of three options: Make no changes to coverage of those five conditions in the report’s final language before passing it to the Legislature; adopt the task force’s less-prescriptive proposal; or modify the recommendations before including them in the report. 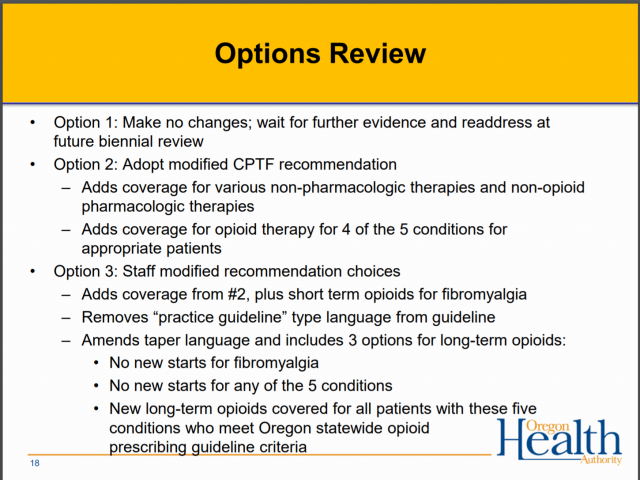 In the end, HERC moved to agree with its Value-based Benefits Subcommittee’s decision earlier in the day, tabling the plan until the next biennial report in 2022.

The commission also voted on Thursday to change language around opioid tapering in the back and neck pain guideline as part of its “interim game plan,” saying the changes would go into effect in October.

Rather than mandating opioid-usage tapering, the amended guidelines require “an individual treatment plan where clinically indicated.” Those tapering plans aren’t ruled by any specific deadlines. 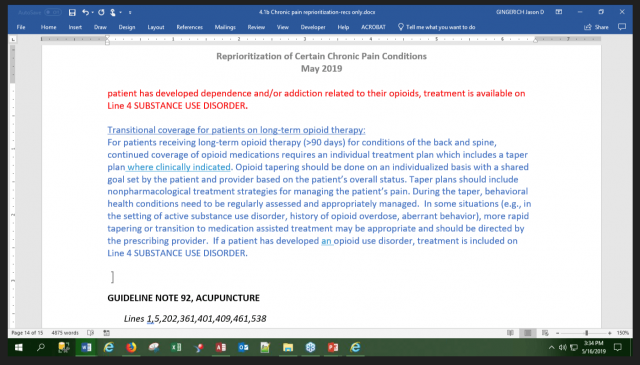