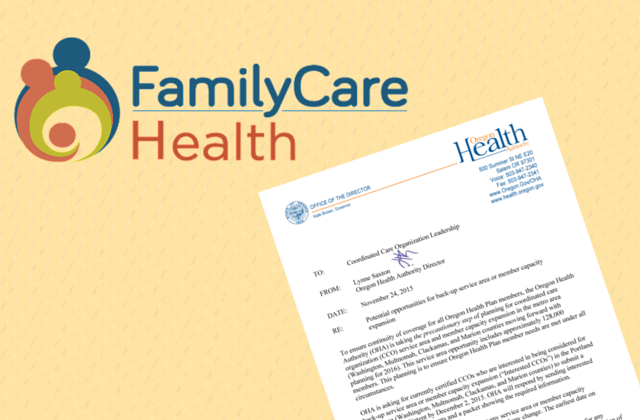 Portland — In an unprecedented move, the Oregon Health Authority (OHA) has invited Coordinated Care Organizations to submit a binding letter of intent if interested in taking over the geographic areas currently served by FamilyCare Health. In their memorandum, OHA states this is a precautionary step “to ensure continuity of coverage”.

“To say this is an unconscionable action is an understatement,” according to Jeff Heatherington, President and CEO of FamilyCare. “All CCOs have a five year contract through December, 2018. FamilyCare Health has a proud history of serving the Medicaid population for more than thirty years and has told the OHA that we are actively making plans to continue our member investments in 2016 and beyond.”

The OHA initiated a call with FamilyCare executives on November 3, 2015 to discuss FamilyCare’s plans for 2016. During this call, they asked if FamilyCare was going to sign the 2016 contract. FamilyCare re-stated its commitment to continued services; however, they had not yet seen the contract amendment (which was sent after the statutory timeline) but assured OHA they would review it in the 60 days that were required. FamilyCare never indicated it would not sign the amendment and OHA has not contacted FamilyCare since the 3rd to get an update.

FamilyCare is concerned about the impact OHA’s unwarranted action will have on its members, providers, community partners, and employees.

“As a result of this action, FamilyCare will now need to devote resources to providing assurances and damage control for a problem that was created by the state,” stated Heatherington.

FamilyCare Health is a Medicare and Medicaid managed care organization providing patient?centered healthcare to Oregonians for more than 30 years. FamilyCare was the first health plan in Oregon to integrate models of physical and mental health and was the first Coordinated Care Organization in the tri?county area certified by the Oregon Health Authority. The health plan serves more than 130,000 members. FamilyCare Health’s mission is, “Creating healthy individuals through innovative systems.”