Note: this report updates a previous analysis of Oregon hospital financials. It includes additional data from Q4 2014 and revised margins.

This report provides an analysis of the financial health of Oregon Hospitals through the fourth quarter of 2014 and annually since 2007. Data is compiled from the databank provided by the Oregon Health Authority’s Health System Research and Data office. 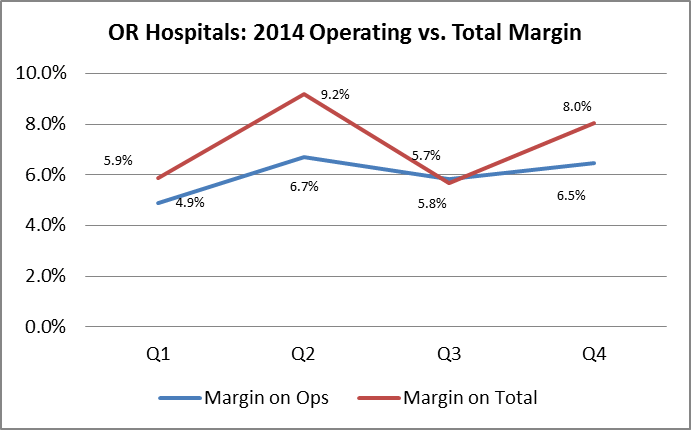 Oregon hospitals’ margins on operating and total revenues in 2014/Source: State of Reform with data provided by the Oregon Office of Health Systems Data

Margins on operating revenue remained fairly stable between 5 and 7 percent throughout the year. Margins on total revenue saw more significant bumps in the 2nd and 4th quarters. Total margins include non-operating income from real estate investments, donations, etc.Most Oregon Hospitals posted strong margins on operating and total revenues in 2014. Of the 57 hospitals included in the report, only 10 reported a negative margin on total revenue. This continues a trend going back to 2007, where just eight hospitals have posted negative margins over that period.

Ashland Community Hospital had the worst year in 2014, posting a negative margin of nearly 10 percent while losing over $4.5 million.

The ten hospitals with the highest margin on total revenue include:

The ten hospitals that reported a negative margin on total revenue include: 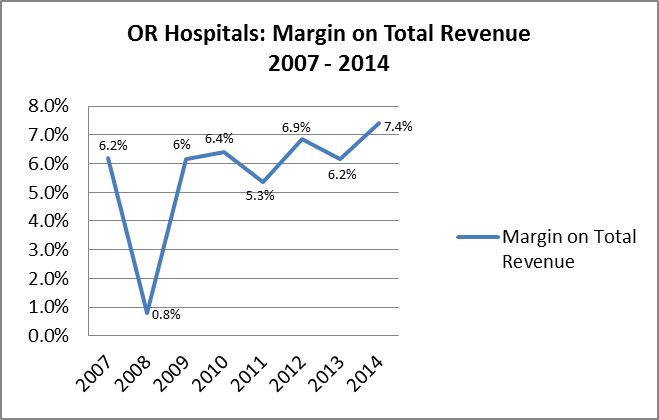 Oregon hospital margins on total revenue from 2007 to 2014/Source: State of Reform with data provided by Oregon Office of Health Systems Data

[1] While Kaiser’s Sunnyside Medical Center reported a $56 million loss in 2007, no revenue was reported and no reports have been filed since. Due to the lack of complete data it was not included in this comparison. This is also true for Shriner’s Children’s Hospital.