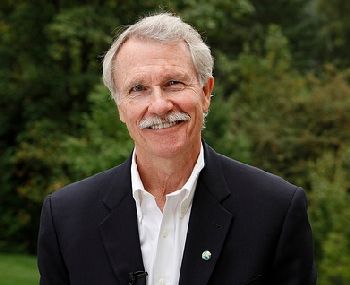 The Governor’s Recommended Biennial Budget for 2015-2017, released Dec. 1, reveals Gov. Kitzhaber’s ongoing commitment to health care reform in Oregon with a $600 million increase in General Fund expenditures for human service programs as well as an outline of the state’s top health care priorities.

The budgeted expenditures on Human Services for Oregonians amounts to 26% of the state’s General Fund and 43% of the All Funds Budget which includes federal matching monies. 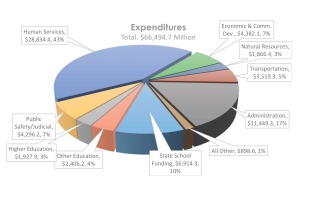 Despite the increased costs over the next two years, fixing the health care system will ultimately guarantee the success of all programs, according to the Governor.

“Every dollar saved on unnecessary health expenses is a dollar that can be reinvested in children and families, education, creating good jobs and building statewide prosperity,” Gov. Kitzhaber stated in the Budget.

The Governor added that Oregon’s new business model for health care is “on track to have a structural budget surplus seven years from now.”

The Budget also includes a $53.2 million increase in community mental health and addiction services and a $100 million investment for increasing the inventory of low-income housing for homeless families which the Governor explained is intrinsically linked to public health.

Expanding the Reach of CCOs

Included in the proposed Biennial Budget is a plan to expand Coordinated Care Organizations (CCO) in the state. To achieve this goal, the Oregon Health Authority (OHA) will receive $18 million in total funds which is a 13.8% increase from the last Biennial Budget.

The Oregan Health Plan, a collection of CCOs tasked with holding down the state’s growing Medicaid cost, was created by a bipartisan bill in 2011. At the time, the state’s Medicaid bill was growing at 5.4%, a rate faster than the 4% growth of state revenue. Gov. Kitzhaber took the gamble that investing in CCOs would save the state money in the long run. 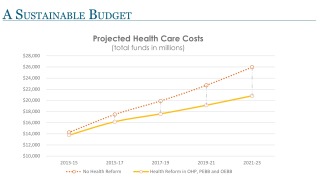 Along with the Public Employees Benefits Board (PEBB), which provides health care to state workers, the CCO system was projected to save the state more than $3 billion in eight years.

CCOs work within a budget capped at 3.4 percent growth per member each year by improving quality of care measures. They are charged with using innovative best practices and avoiding costly health crises.

According to the Budget, the CCO and PEBB union has been successful. PEBB has experienced “lower health care costs each year compared to premiums collected” since moving to a self-insurance model and excess funding of $120 million from the PEBB stabilization fund is transferred to the General Fund.

The 2015-2017 Budget proposes that the success of the PEBB experiment be mirrored onto the Oregon Educators Benefit Board (OEBB), which covers teachers in the state. Combined, the OHP, PEBB, and OEBB cover 1.3 million Oregonians.

“My budget aims to expand the coordinated care model to cover more public employees and make it available to small businesses to lowers costs and improve their competitiveness,” Gov. Kitzhaber stated.

Across the board, spending on human services programs in Oregon for the next two years will go up.

The Department of Human Services (DHS) will receive a 7.8% total funds bump. This increase amounts to $10 million in total funds and 7,380 positions.

DHS is divided into five programs which include: self-sufficiency, child welfare, vocational rehabilitation, aging, and intellectual and developmental disabilities.

The Long Term Care Ombudsman program which provides public guardians for the disabled, mentally ill, or elderly in long term care facilities without family or friends, will receive $6.7 million, a 48.5% increase from the last biennial budget. This expenditure targets eradicated abuse of the elderly according to the Governor.

Finally, the Psychiatric Security Review Board, which supervises adults and youths who successfully assert the guilty except of insanity defense in criminal proceedings, receives $2.6 million in total funds, a 5.5% increase.