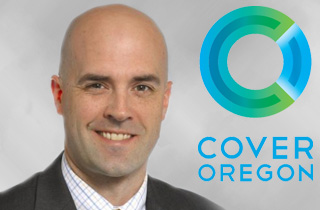 Cover Oregon has selected its new Executive Director, Aaron Patnode. Despite an uncertain business plan for 2014-15, the Cover Oregon Board unanimously approved Patnode’s hire on Thursday, June 12. Patnode previously implemented the Federal Affordable Care Act overhaul as a manager at Kaiser’s Portland offices. He arrives after an exhausting search:

Dennis Karras, who consulted for the executive director search committee, said 70 people applied for the job and 19 were interviewed either in person or via video conference. The pool was narrowed to six people, but after the exchange decided to use federal technology for its private market, some dropped out.

Patnode is among the six finalists, and he had stood out from the beginning, said Dr. George Brown, who chaired the search committee. The other finalists were not identified.

Patnode faces incredible odds. Cover Oregon’s botched state exchange implementation will migrate to the Federal exchange by this fall. Layoffs last Friday were expected to reduce payroll by 30 percent. His tasks are clear: bring Cover Oregon out of obsolescence and mismanagement and onto a Federally-hosted exchange, implement a strategic agenda, and facilitate Gov. Kitzhaber’s on-going legal charges at Oracle over the Cover Oregon site. The challenges don’t stop there.

Patnode will also be the fourth Executive Director (interim or otherwise) at Cover Oregon in the past six months. He replaces interim Executive Director, Clyde Hamstreet, who took over after preceding interim director Bruce Goldberg stepped down. With a salary ranging from $134,000 to $225,000 per year and performance incentives, there are high expectations for Patnode.