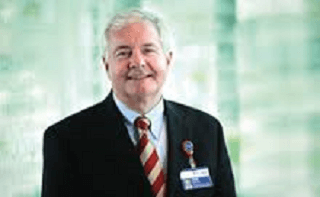 Veteran health care executive Greg Van Pelt has been called on to serve as the face of Cover Oregon and its failures during a hearing on Capitol Hill this Thursday.

Van Pelt, who retired last April as CEO of Providence Health & Services in Oregon, has been acting as an advisor to Oregon Gov. John Kitzhaber since November to help sort out the technical problems with the exchange website and manage the hybrid paper-and-online process that Cover Oregon has developed to get individuals enrolled in private coverage. He is also president of the influential Oregon Health Leadership Council.

It was announced today that Van Pelt has been asked to testify on behalf of Cover Oregon during a hearing titled “Examining ObamaCare’s Problem-Filled State Exchanges” that will be held by two subcommittees of the House Committee on Oversight and Government Reform.  He is listed on a panel of witnesses representing six state-run health insurance exchanges that include Hawaii, Maryland, Massachusetts, Minnesota and California as well as Oregon.

The committee’s press release explains that the point of the hearing is to “examine the failures of the state exchanges and the implications for taxpayers and consumers, as well an example of a state that has been able to navigate its exchange launch better.”

The example of a “better” exchange is presumably California, which has enrolled more than a million of its residents in qualified health plans.  It’s an equally safe bet that Oregon is among the other five whose “failures” will face some pretty harsh scrutiny.

The job of explaining those failures falls to Van Pelt, who stands out somewhat curiously as the only invited witness who is not a top official in a state-run exchange.

The others who are on the witness list are:

Calling on Van Pelt to testify on behalf of Oregon’s troubled exchange — instead of its interim executive director or its board chair — points out just how empty the leadership bench is at Cover Oregon these days.

Interim Executive Director Bruce Goldberg, who resigned last month as director of the Oregon Health Authority, is also on his way out at the exchange, which has been without a permanent director since Rocky King went on medical leave last December.  So are two others:  Kitzhaber asked the Cover Oregon board last month to remove Aaron Karjala as chief information officer and Triz delaRosa as chief operating officer.  Karjala resigned on Monday.

That leaves the chair of Cover Oregon’s board, Liz Baxter, as one of the few leaders left standing who could speak with authority on Cover Oregon’s behalf.  Baxter was named to the board in the summer of 2011 and has remained at the helm throughout Cover Oregon’s ups and downs.

When Kitzhaber announced last November that he was bringing on Van Pelt as an advisor, he emphasized that Van Pelt would bring an “outsider’s eye to a challenging situation.”

But somehow the job of explaining Cover Oregon’s failures during a high-profile hearing on Capitol Hill has fallen to Van Pelt instead of anyone with direct responsibility for the decisions that contributed to those failures.