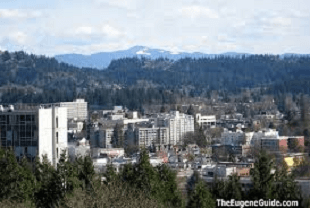 Bloomberg released a ranking of U.S. cities with the most income equality over the weekend.

Eugene—Oregon’s second largest city—was the only city in the Pacific Northwest on the list, ranked at #22. The city’s median household income is $39,150, and approximately 27.6 percent of the population lives in poverty.

Those numbers are significantly higher than Portland’s statistics.

And it’s clearly causing a strain on the area’s healthcare system. Eugene, and its county, Lane, are served by one coordinated care organization, which closed for enrollment earlier this year because the county’s Medicaid population quickly tripled.

Yesterday, the Oregonian published a series of nifty maps showing the rate of poverty and assistance programs, including Medicaid, throughout out the state by county. Based on data from the Department of Human Services, the maps clearly show that Lane County’s rates are above the state average.