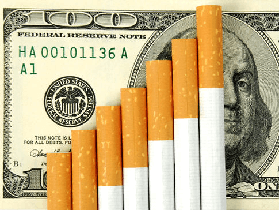 Despite spirited testimony from Oregon lawmakers this morning, the Legislature appears unwilling to raise the state’s cigarette tax.

House Bill 4129 would sharply increase the tax by $1.50 per pack of cigarettes, bringing the total tax to $2.81. It would make Oregon’s cigarette tax one of the highest in the nation.

With the tax currently set at $1.31 per pack, Oregon ranks 29th in the nation, and lags far behind Washington, which taxes cigarettes at $3.025 per pack, one of the country’s highest rates.

The increase would generate approximately $50 million in additional General Fund revenue, which would be designated to tobacco prevention and cessation programs, the state’s coordinated care organizations, and mental health programs—one area lawmakers already agree is in desperate need of additional funding.

“It should…decrease the number of people who smoke, and people who start. Adolescents are particularly sensitive to the price point,” said Rep. Elizabeth Steiner Hayward, D-Beaverton, one of the bill’s sponsors. “Cigarette taxes should be viewed primarily as a public health intervention.”

But raising taxes are always unpopular in Oregon, something lawmakers are keenly aware during an election year. The bill was heard in the House Revenue Committee, and the committee’s chairman, Rep. Phil Barnhart, D-Lane County, closed the public hearing without announcing any further action on the bill.

Legislation increasing the cigarette tax is introduced each year in the Legislature and rarely passes. The tax was increased by 13 cents during a special session last September, as part of protracted negotiations to reach a “grand bargain” on a small business tax package. That increase took effect on Jan. 1.

“If you pass this, we wouldn’t keep coming back,” quipped Rep. Brian Clem, D-Salem, the bill’s chief sponsor.

A recently released report from the American Lung Association gave Oregon an F for its tobacco prevention and cessation programs, a D for its cigarette tax rate, and an A for smoke-free air.