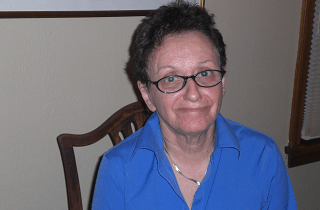 OR: Interview with Diane Lund-Muzikant, The Lund Report — Part 2

Diane Lund-Muzikant is editor-in-chief of The Lund Report–the first independent Web site in Oregon dedicated to educating the public about the inner workings of the health care industry as well as a must-read for many industry insiders.

In part one of this three-part interview, Diane told DJ about Oregon Health Forum, which she ran for 16 years, prior to launching The Lund Report. Here, in part two, Diane tells DJ about some of the experiences and relationships that have shaped her career and made her something of a “comeback kid.” (Part three, in which Diane talks about the future of journalism, health care reform and The Lund Report, is available here.)

DJ: Tell me about Israel.

I went to Israel when I was very young. I met my first husband there.

I worked at the Hebrew University [of Jerusalem], at the Jerusalem Post.  My daughter was born there.  Then my husband and I were divorced and I came back here.  I worked in a kibbutz for a while.  I challenged the kibbutz leader.

I told him about Goethe, which I had learned about in college.  He wasn’t very impressed at all.  He put me in the chicken shed.

DJ: Tell me about the Jerusalem Post.  How was that?  Was that your first journalism position?

I had done some work in Minneapolis, but yeah it was compelling.  I was in Israel in the ’60s and ’70s, and it was a different time then.  There was still a lot of rift between the Palestinians and Israelis.

DJ: Looking back, what would be one of the formational things which have helped put you where you are today?

To survive in Israel you have to be aggressive.  So I probably learned a lot of my investigative skills there just in survival mode.  There is conflict all of the time.

It’s hard to think back and know what really made me what I am.  I’m sure that was a large part of it.  I don’t know if it changed me as a journalist as much as it did as a person.

I’m not what you’d call a capitalist.  I’m not into possessions and things.

In Israel, you work really hard, and you had to live with less.

I think my values were probably developed there.

DJ: What was it like growing up in Minnesota?

DJ: How’d your family get to Minnesota?  It doesn’t strike me as a Jewish enclave.

Oh, yeah it is.  It’s very Jewish.  There is a strong contingent of Jewish families there.  There’s a St. Louis Park that they call St. Jewish Park.

My family came from Eastern Europe, Lithuania, Germany, those kinds of places in the early 1900s.

DJ: What did your parents do while you were growing up?

My mother was a stenographer, and my father worked for the railroad.  They weren’t very educated people.  Then I had a brother who died several years ago who was a stockbroker and an avid athlete.

DJ: So, where did this passion – I guess it’s not so much a passion – but where did you get this commitment to the truth that you have?

From my grandmother.  Of all the people in my life growing up, she probably had the most influence on me as anyone.  The story goes that before the formation of Israel in 1948, she would go around with a pushka, a donation box, and raise money for Israel.  People would see her coming and people would close their drapes.

But she was not deterred.  She would just keep going.  Nothing would stop her from what she saw as her abiding love for the truth.  She was very strong.  Very domineering.  Very strong.  She had 5 children.  And I was her first granddaughter.  So we had a very special affinity.  So, that story of her going around with her little pushka box has sort of carried me.

In Judaism, you name your children after someone who is no longer alive, so I named my daughter after my grandmother whose name was Esther – my daughter’s name is Elissa.

DJ: Does your daughter know the affinity you have for your grandmother?

My daughter has a lot of the same values.  She is a clinical psychologist, so she is seeking the truth in a different way.

DJ: I think people probably see you as an institution, whether they like you or not.  In many ways, I don’t know how to describe you, but…

One thing I’m really proud of is that I’m the comeback kid.  It’s really hard to be fired, even if you choose that role.  I really didn’t think about starting anything else, but – I don’t know if I told you this – but I had a very big misfortune.

We were in Ethiopia six years ago, seeing the tribes and the nomads.  The southern part of Ethiopia is pretty undeveloped.

You have just very rugged territory.  But you see things you would never see anyplace else.

We were driving in a car, and the driver missed the curve and hit a tree going very fast, going about 60 miles per hour, and I was injured.  And he put his hand on the car and yelled – I’ll never forget – he yelled “what am I going to do?”

“We’ll find somebody to get you to the next town.”

We flagged down a car that was coming by – and there weren’t a lot of cars out there in the middle of nowhere – there were no paved roads or highways. But we finally got one.

The car was driven by a Norwegian physician, and his wife was a nurse  — they were missionaries — and they had two kids with them and another woman.  And they put me in the front seat, and we drove.  We drove for hours and hours until we got to the hospital.

It wasn’t the kind of hospital you ever want to be in.

But they brought the x-ray technician in, and they took the x-rays and they said, “You have broken your pelvis in three places.”

We never did see the driver again.  But the missionaries stuck with us.  They were religious. Lutherans, I believe.

So they took us to the home of a minister – because we weren’t in any condition for a hotel, my husband had whiplash – and they carried me in, and we spent the night there.  And the next day we drove all day – 8 hours – to Addis Ababa, and we stayed with missionaries again.  I was in a wheel chair.  I was lifted into the plane on the way back home.  I couldn’t get up to use the restroom.  I mean you don’t go to the restroom when you’re in a wheelchair.

We flew to Amman, and then to London, and to Seattle.  You know, drinking wine, taking pain pills, lots of Vicodin.

We got to Seattle, where got the car – this is a long story I know – got in the car and drove to Providence in Portland.  I was admitted to the hospital, and was in the hospital for five days.

I had to learn to walk again.  I was on a lot of morphine.  I was in severe, severe pain.  Breaking your pelvis is pretty horrible.  It took me like 2 to 3 months to recover.  And during that time people were encouraging me to do something.  I wasn’t looking to start anything new.  But I thought ’here my life has been spared.  Maybe I do need to do something else.

So, I feel very, very blessed that  even though I was in a very serious car accident, such wonderful people came to my rescue.  And I’ve been able to build myself back to what I am today.

Just a few months ago I ran a half marathon.  And, I plan to run two half-marathons next year.

I’m working out with my trainer on Friday.  So nothing will stop me.  I’m unstoppable!

You wake up every day and say, “Thank goodness I’m here.  What can I do to make a difference?”  Maybe reporting on the latest profitability of an insurance company or a hospital to show where our health care dollars are going.