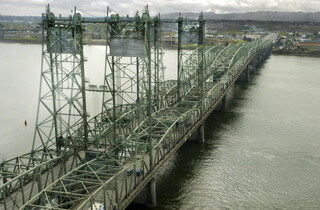 Cover Oregon an obstacle to developing the CRC?

Reading the papers this morning, I saw this interesting nugget from an editorial in the Oregonian.

Ostensibly, the article was about the Columbia River Crossing (CRC), a proposed bridge connecting Oregon and Washington.

Then, in December, the big ugly was unmasked: a $100-million-plus failure to successfully launch Cover Oregon, an online health insurance exchange, undercutting the public’s faith and deflating for the CRC’s single greatest advocate, Gov. John Kitzhaber.

The cautious political climate now might make the Legislature gun-shy on any big projects. That could push the CRC into the ether. Yet it would be wrong to let the CRC languish and become a precedent for how Oregon shies away from big things.

The CRC is a controversial project, with leaders like Sen. Don Benton dug in opposing the project largely due to the inclusion of light rail.

While I guess it shouldn’t come as a surprise, surprise me this did:  that the failure of Cover Oregon is now being cited as influencing the politics and appetite for promotion of other projects as diverse as building a new bridge.

At least in Oregon.

I’m a little hard pressed to identify a corollary in Washington:  strong tail winds from the successful exchange supporting efforts at bigger projects in Olympia.  Though, arguably, the latest efforts at integrating mental health and physical health in Medicaid are a pretty big deal.