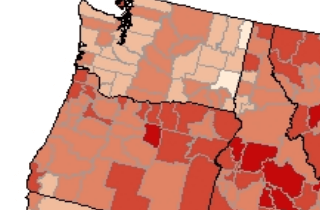 WA and OR: Ranked for Uninsured Populations 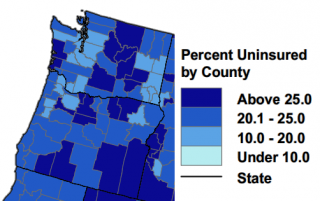 When it comes to residents without health insurance, Oregon and Washington fall right in the middle.

According to a recent report from the U.S. Census Bureau, an average of 15.4% of Oregonians and 16% of Washingtonians were uninsured for the three-year period from 2009 to 2011. Both states find themselves at the national average.

Massachusetts has the lowest percentage of uninsured residents, at about 4%, while Texas has the highest, at almost 25%.

The report also looked at individual counties. The county in Washington with the lowest uninsured population was Kitsap at just over 13%. The county where the percentage of uninsured residents grew the most from 2008 to 2011 was San Juan with an increase of over 4%.

The percentage of the population that is uninsured in Oregon has dropped since 2011.  According to the Oregon Health Authority, 550,000 Oregonians are currently uninsured. That number is expected to drop to 360,000 next year and 170,000 in 2016, when a projected 5 percent of the state population will be uninsured.

Those changes will be due, largely, to the Medicaid expansion, as the percentage of those on the Oregon Health Plan grows from 19 percent today to a projected 28 percent in 2016.