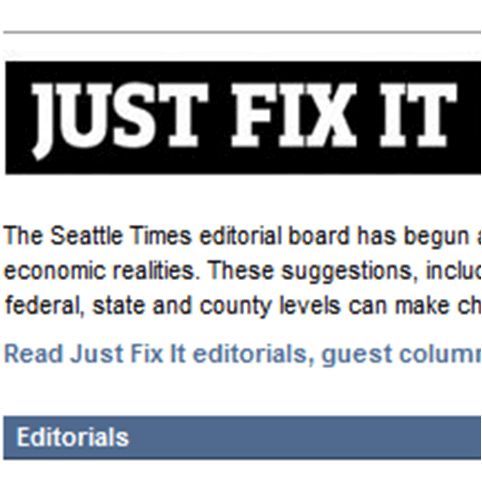 Articles From The Seattle Times & Everett Herald Worth Reading

Today, April 3, the Seattle Times and Everett Herald ran a couple articles worth checking out.

The first article, from the Seattle Times Editorial Board, comments on Oregon’s Health Plan and it’s benefits to teachers and to the state. According the the Times:

The Oregon [Educators Benefit] board reduced 96 different insurance plans to 11. It put the plans out to bid, and signed multiyear contracts with Kaiser, Providence Health Plans and several others. Oregon’s law requires most school districts to join the plan unless they have a comparable or better deal. Three and a half years into the program, three-quarters of the public school employees in Oregon are in and 14 of the 17 community colleges are in.

The board’s surveys show that nearly 9 in 10 who have used the service are happy with it. The Oregon Education Association is happy with it. A report by Towers Watson, consultants, estimated a year ago that the Oregon plan was saving employers and employees $45 million a year.

In Washington, State Auditor Brian Sonntag has estimated consolidating the 300 different insurance plans here could save as much as $90 million a year — double the Oregon figure.

The second article, by Donna Gordon Blankenship for the Herald, highlights that Washington state residents are healthier than many others in the United States. The report comes from a recent study ranking the healthiest counties in each state, which can be accessed here. From the article:

A new report ranking the relative healthiness of Washington communities makes some places in the state look better than others, but a researcher for the report being released today says no matter which county you live in, you’re probably healthier than residents of many other states.

“Overall, it seems like Washington … has created a really incredible culture of health,” said Angela Russell, an associate researcher at the University of Wisconsin Population Health Institute.

Washington’s healthiest counties are consistently better than the national average on measurements like smoking, teen births and premature death. But the Washington counties ranked lowest in the County Health Rankings study from the University of Wisconsin and the Robert Wood Johnson Foundation aren’t far behind.