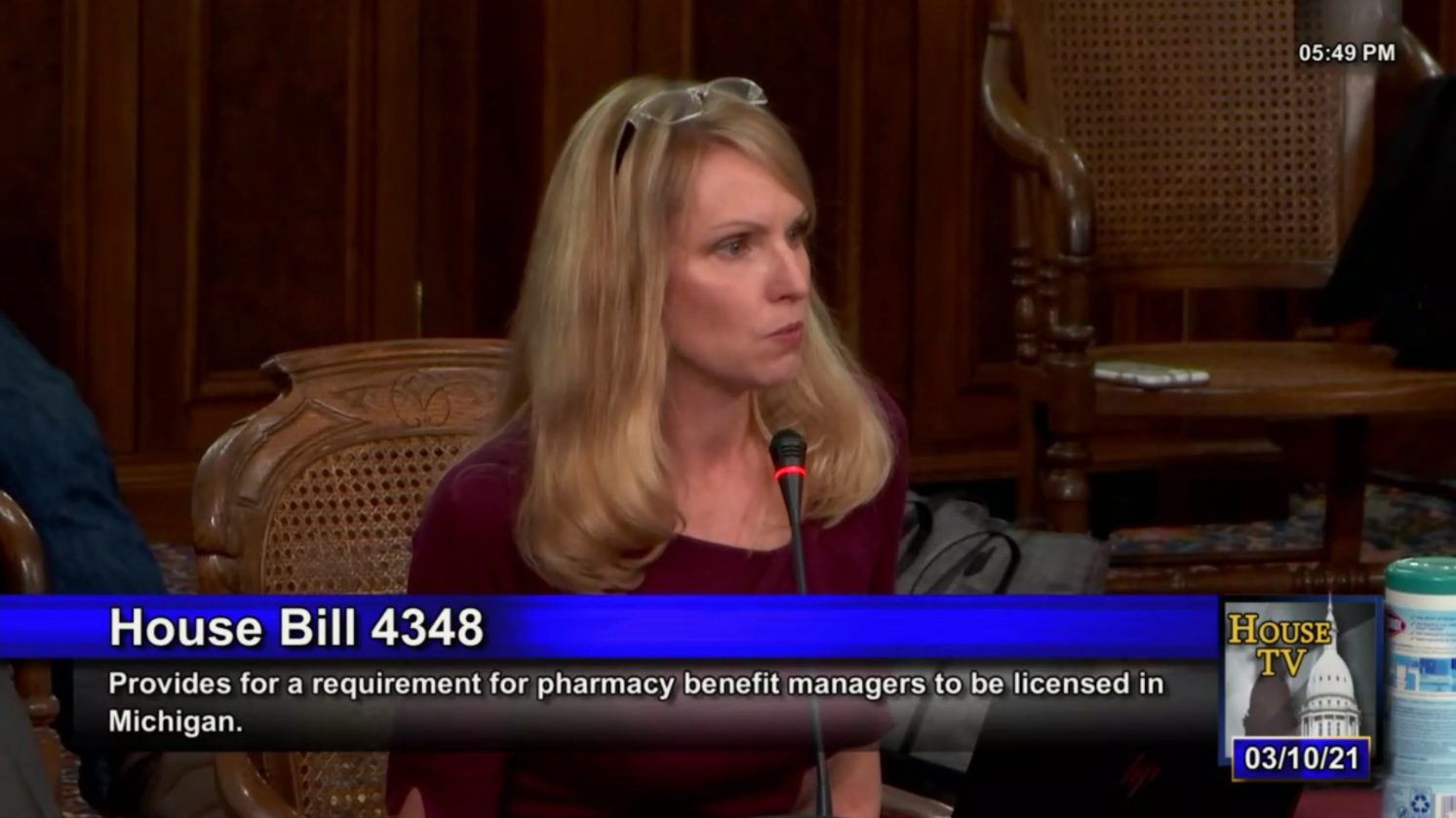 Michigan committee hears testimony on bill that would regulate PBMs

Testimony for HB 4348 was heard by the Michigan House Committee on Health Policy on Wednesday. The bill, which was introduced by Rep. Julie Calley in February, would require Pharmacy Benefit Managers (PBMs) to be licensed and regulated in Michigan.

Representative Calley explained what PBMs are to the committee on Wednesday, while also giving reasons for why she believes they need to be regulated:

“There is a middleman that many of us are not aware of [in pharmacy]. Certainly, our constituents are not.

So let’s say your beloved aunt goes to the doctor and it’s determined that they need another prescription. Most of us assume that when that script is presented to the pharmacy it’s the health plan who is determining what drugs are covered and at what cost. That’s actually not the case, what Americans pay at the pharmacy counter is determined by a complex opaque third party system.

The role of a PBM is to administer drug benefits for health plans, create and update [the] drug formularies process and pay pharmacy claims.”

“Historically, PBMs have been allowed to operate in the shadows shrouded in secrecy. There’s never been a more appropriate time to add transparency. We all know times are tough, we hear from our constituents, every single day. We get the calls by day, we get the emails by night, people are hurting.

Too many people are trying to decide whether to put food on the table or take prescription drugs that they’ve been told to by their physician.”

Representative Calley said that in 2017, almost a third of Michiganders stopped taking prescription drugs at some point due to costs. She believes that regulating PBMs and creating more transparency would create lower prices.

A Supreme Court ruling in December, Rutledge v. Pharmaceutical Care Management Association (PCMA), opened the door for regulations on PBMs. Representative Calley said that Michigan should take advantage of the moment to help lower drug prices in the state.

According to Rep. Calley, forcing PBMs to license themselves in Michigan would shine more transparency on their actions and how they price certain drugs. She said that licensing would require PBMS to report wholesale acquisition costs, report net revenue of all rebates and fees and report aggregate retained fees and rebate percentages.

It would also require for pharmacies that are not affiliated with PBMs to be reimbursed at the same rate as affiliated pharmacies. Grant Brown, a pharmacy owner who testified as well, told the committee that the practice of PBMs diverting customers away from non-affiliated pharmacies hurts small businesses like his in the state.

Pharmacy Benefit Managers themselves oppose the bill, though. Sam Hallemeier, a representative from PCMA, testified in opposition:

“PBMs are projected to save patients in Michigan, $962 per patient per year. Thanks to tools such as negotiating price discounts for drug manufacturers, establishing and maintaining pharmacy networks.”

The PCMA takes issue with a few sections of the bill.

Section 15 of the bill would prevent PBMs from performing “clawbacks,” a process where they reduce reimbursement to pharmacies after already making payments. Hallemeier fears that this section could lead to many PBMs underpaying pharmacies when reimbursing them. The section also limits the fees PBMs can collect. Hallemeier believes that this hurts the PBMs’ abilities to run sophisticated IT systems that help fill prescriptions and calculate prices.

Representative Calley sponsored the bill with two other Republicans and two Democrats. The bipartisan legislation is a part of the 15-point plan for sweeping Michigan health care changes that representatives introduced last month. Other parts of the plan include an insulin co-pay cap and provisions that would increase the transparency of drug prices.