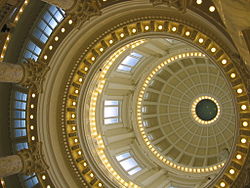 Exchanges and Medicaid Expansion on the Move

Yesterday proved to be a busy day for advancements in state-based exchanges and Medicaid expansion across the country.

AP reports that the Idaho House approved the Exchange last night. The bill will need to be reconciled with the Senate-passed version. For some, it was the lesser of two evils: “‘Today, I stand not necessarily in favor of a state exchange, but absolutely opposed to a federal exchange,” said Rep. Robert Anderst, R-Nampa.’

Meanwhile, AP is also reporting that Idaho Rep. Tom Loertsher is introducing a bill to expand Medicaid to include people up to 138 percent of the federal poverty line.

In Utah, the Salt Lake Tribune reports that lawmakers stripped HB 391 of language prohibiting the state from expanding Medicaid late last night. The substitute version, which essentially allows the governor to decide on the expansion once a cost study and thorough review of “charity care” alternatives have been vetted, passed both chambers.

And the Washington Post reports that the DC Health Benefit Exchange Board has voted to move forward with the small business exchange mandate. Vermont is currently the only state with such a mandate on small business.