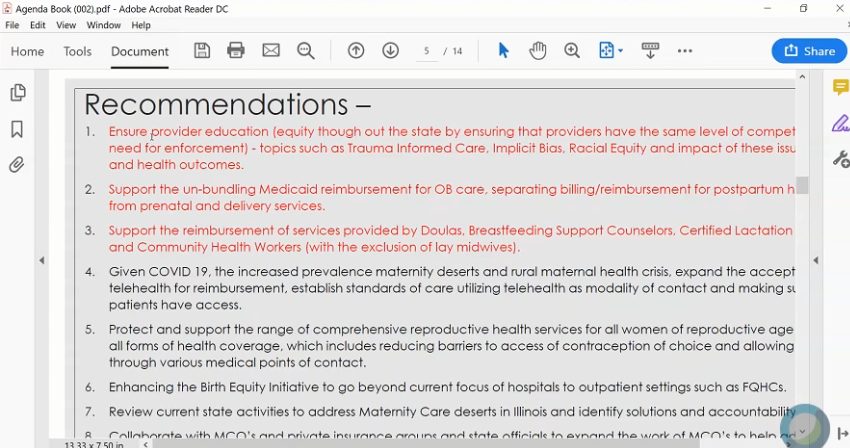 The Illinois Task Force on Infant and Maternal Mortality Among African Americans had their monthly subcommittee meeting on Tuesday. During the meeting, they discussed their recommendations to the Illinois Department of Public Health (IDPH).

The committee has three main recommendations to the department. First, they recommend the state invest in education for medical providers on topics such as trauma informed-care, implicit bias and racial equity. They would also like to inform providers as to how those factors affect health outcomes.

Two additional ideas were submitted before the meeting as well. First, IDPH could partner with local elected officials, community leaders and religious leaders to spread awareness of services pregnant women and new mothers have access to in the state. The second idea was to offer health-based workshops at the Annual Black Women’s Expo.

Catherine Harth, an Associate Professor of Obstetrics and Gynecology at the University of Chicago, believes that the additional suggestions can help beyond just providing mothers with care, but also informing them of the options available to them:

“I think one of the things that these two suggestions offer is some opportunity. A lot of the initiatives are dealing with the delivery process and providing the delivery care, and not so much on the early exposure getting prenatal care and how to get people into that first visit in the first trimester.

A study by the Centers for Disease Control (CDC) in 2019 found that Black and American Indian women were two to three times more likely to die from pregnancy-related causes than white women. They also found that many of these deaths were preventable.

The Center for American Progress attributes the disparities in health outcomes to the lack of access Black women have to health insurance, health care, maternity care and reproductive health care. Black women are 55% more likely to be uninsured than white women and those enrolled in Medicaid cannot use federal funds to get an abortion in some states.

Hospital closures in poor and minority communities add to disparities in health outcomes. A bill filed in January, SB 558, would halt all hospital closures in the state for three years. The bill is a response to the announced closing of Chicago Mercy Hospital, which serves a Black community in Chicago.