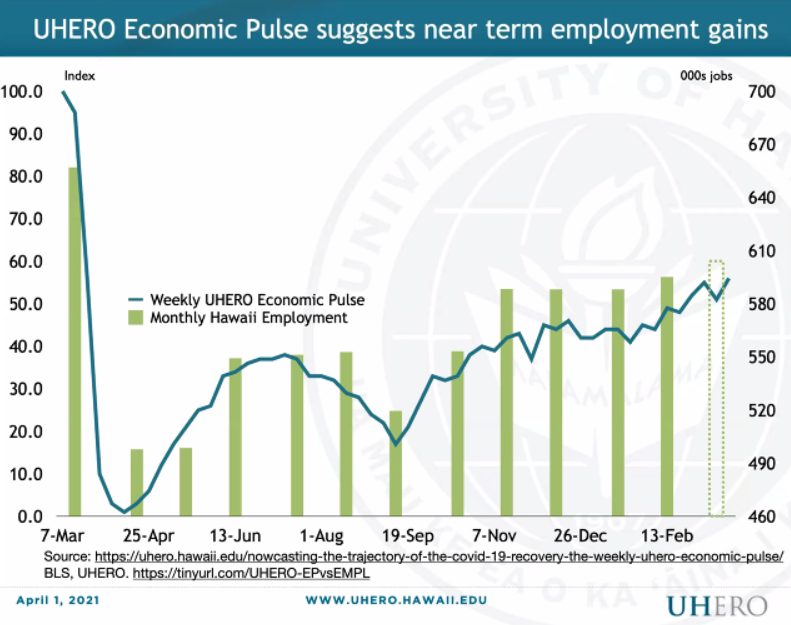 Hawaii’s economic outlook looks even more optimistic than previously suggested thanks to the influx of federal aid from the American Rescue Plan Act and the increase in vaccinated Hawaii residents.

Carl Bonham, PhD, Executive Director of the University of Hawaii Economic Research Organization (UHERO), provided details on Hawaii’s economic recovery and expectations for the future during a Hawaii Economic Association meeting on Thursday.

UHERO’s Economic Pulse index – which tracks information such as daily visitor counts, mobility data, and job openings – suggests near term employment gains in the state. Based on the Economic Pulse data, Bonham says Hawaii has recovered about 56% of the economic activity lost since April at the start of the COVID-19 pandemic.

Bonham notes, however, that a potential March surge in cases is worrisome. Hawaii is currently experiencing an increase in the 7-day average of new COVID-19 cases and a rising positivity rate. These measures of disease activity are similar to what the state experienced in mid-October.

Despite the rise in disease activity, UHERO’s Economic Pulse Index shows an increase from 37 in October to 56 at the end of March. The key reason, says Bonham, is the vaccine rollout. 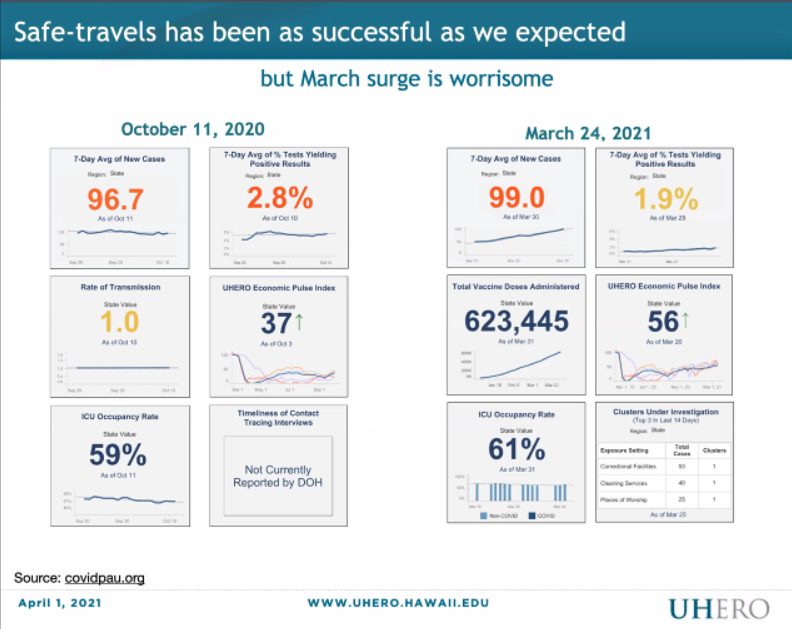 Bonham also describes the recent tourism recovery in Hawaii as being “pretty astounding.” In March, arrivals into Hawaii were 45% of their 2019 levels. This represents a larger recovery than what UHERO included in their most optimistic scenario in the Q1 report.

Looking toward the future, Bonham presented a scenario of how arrivals may change in the coming months. He says that by summer, total visitors to Hawaii could be about 70% of 2019 levels. This would be largely driven by visitors from the United States who could be at nearly 90% of 2019 levels by that time.

But, he warns international visitors may be lagging far behind. In March, international travelers only recovered to 2% of 2019 levels. This could be because of continued travel restrictions in other countries, along with slower vaccine rollouts outside of the United States. 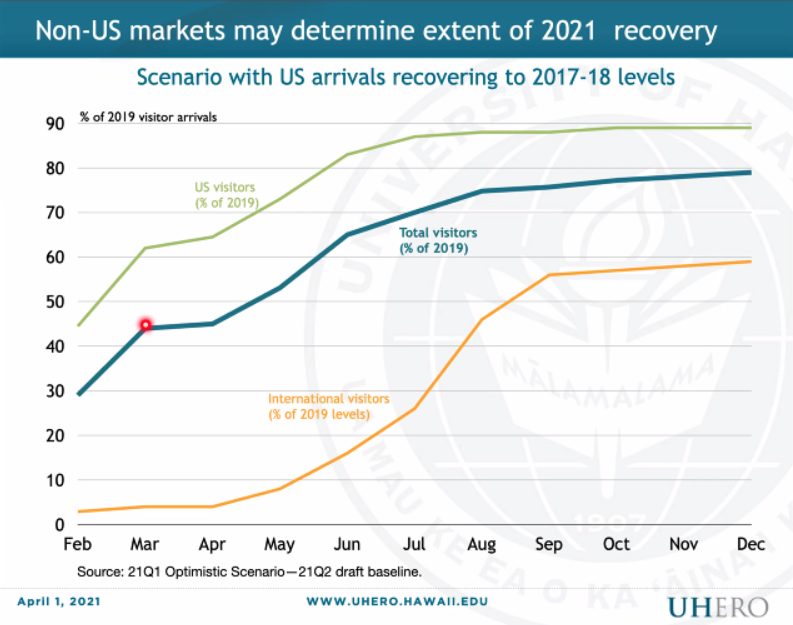 Bonham also discussed the impact of the $1.9 trillion American Rescue Plan Act signed in March. In total, he says the bill is expected to bring in about $2.2 billion in benefits to Hawaii families, $2.2 billion to support state and county government, almost $1 billion in enhanced unemployment benefits, and millions in renter and homeowner assistance.

Thanks to this latest round of federal funding, Bonham says real personal income in Hawaii won’t fall below 2019 levels. He notes, however, that this is a measure of total real income and doesn’t reflect the experiences of all people, such as those out of work and at lower income levels.

Despite this influx in funding, Bonham warned: