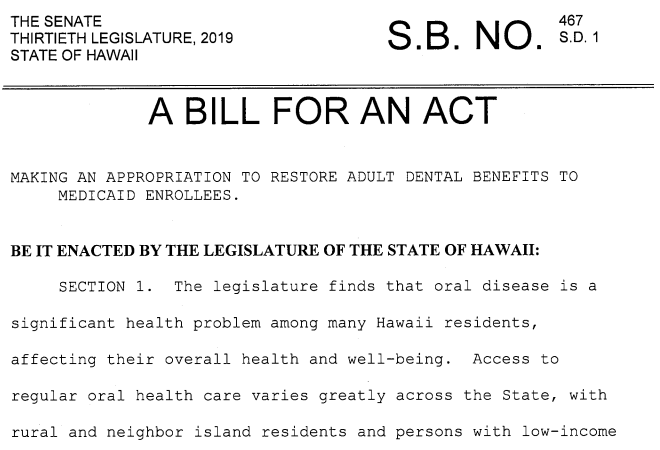 Since 2009, dental coverage for adults enrolled in Hawaii’s Medicaid program has been limited to emergency care. But SB 467, introduced by Senators Russell Ruderman and Stanley Chang, aims to change that by appropriating funds to the Hawaii Department of Human Services (DHS) to restore Medicaid enrollees’ preventative and curative adult dental benefits.

According to the bill, there are large disparities across Hawaii when it comes to oral health. Access is a significant issue for low-income, rural, and neighbor island residents. Reduced access often results in poor dental health which can then lead to other negative health outcomes such as heart disease, diabetes stroke, and depression.

“Lack of access to dental coverage and oral health care is a social justice issue that disproportionately affects the poor, children, the elderly, and racial and ethnic minority groups,” reads the bill.

By providing benefits for preventative and restorative dental care, the goal is to reduce the number of dental-related emergency room visits and the costs associated with these visits.

The bill has received supportive testimony from representatives from the Hawai’i Public Health Institute, the Hawaii Dental Association, the Queen’s Health Systems, the Healthcare Association of Hawaii, the Hawai’i State Rural Health Association, and AlohaCare, among others.

The bill passed in the Senate by a vote of 24-0, and  will now cross over to the House.