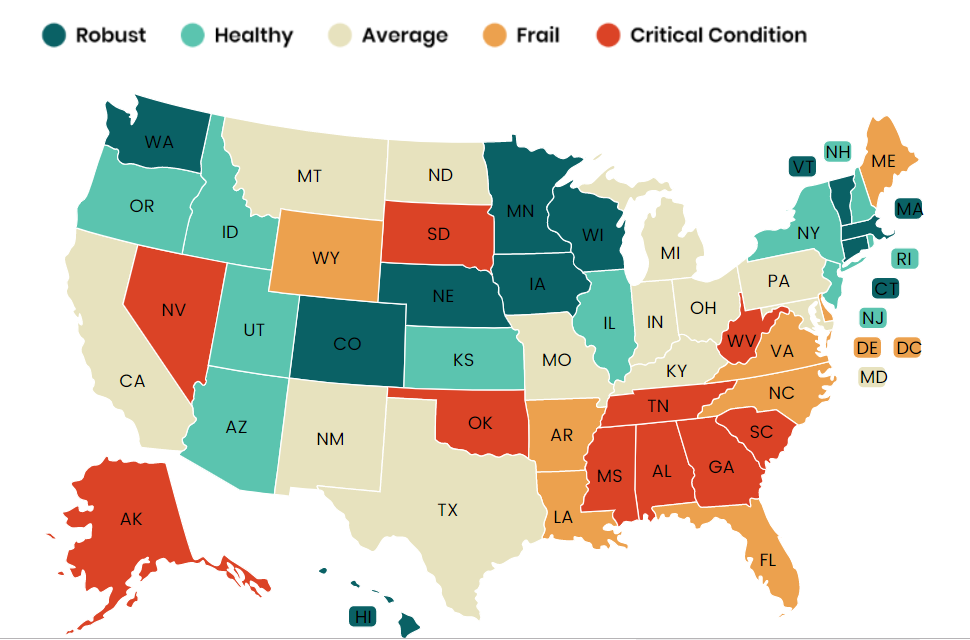 Colorado ranked as the 2nd healthiest state in new report

A recent study conducted by MoneyRates.com assesses health care in all 50 states, and ranks the states accordingly. The study looks at states where finding and paying for healthcare is most difficult, both as a result of high costs of care and limited accessibility.

The report uses the following metrics to rank each state:

Colorado ranks 2nd overall, and is categorically considered “robust,” compared to other states. The ranking is a result of high marks in 5 out of the 8 categories, healthy ratings in two of those categories, and one average ranking.

Colorado has robust infant survival rates, child vaccination rates, hospital capacity, and longevity. The state is well-known for its passion for fitness, and has continually received a reputation as being one of the more active states. This, combined with high health care rankings in other areas identified in this report, all account for the long life-span of Coloradans.

This legislative session, Colorado legislators introduced legislation creating more restrictions on medical, religious and personal exemptions requirements. The goal of the legislation was to increase the rates of immunization rates among school age children by providing more readily available data, and a standardized form for these exemptions. While this legislation was delayed in order for more work to be done, the policy priorities reflect the robust ranking in overall child vaccination rates.

Infant survival rates may be tied to this trend as well. Since 2011, the state has made a pointed effort to decrease the rates of infant mortality and remain below the national average. The state’s goal is to remain on par with the Healthy People 2020 goal of 6.0 deaths per 1,000 births. Keeping this goal in mind, the states robust ranking in this category may reflect that trend.

The state’s health ranking in the patient care doctors, and nursing home capacity demonstrate the ability for Coloradans to seek care despite the increasing population. The percentage of those covered by health insurance, however, is still an area that the state is working to improve.

The percentage of those with health insurance coverage in the state was the category in which Colorado ranked lowest. This legislative session, policymakers and the governor alike worked to decrease costs associated with health care coverage with the goal of increasing the number of Coloradans that can afford and maintain coverage. Bills like the creation of a public option, and the reinsurance bill are key elements of this effort.

The findings in this report can be used to shape future legislation, identifying gaps in current health care policy.