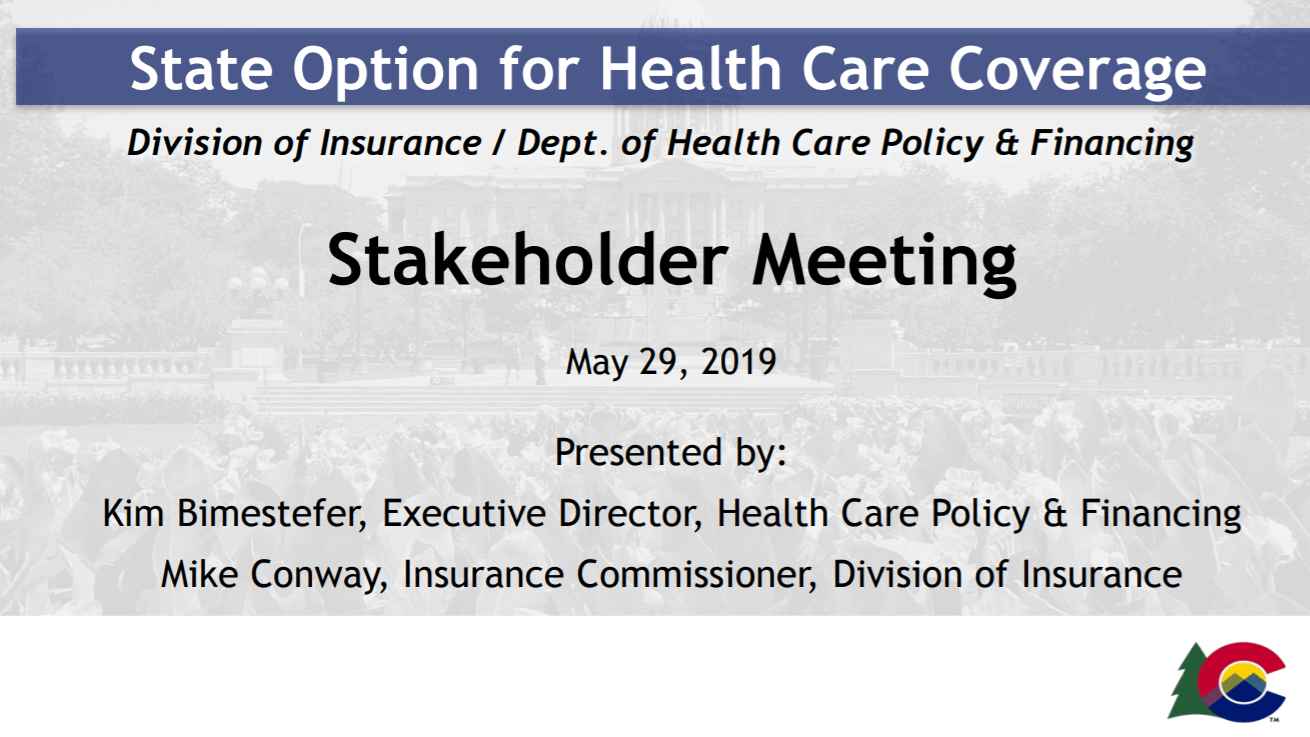 Colorado’s Department of Health Care Policy and Financing (HCPF) and Division of Insurance hosted the first stakeholder meeting regarding a proposal for a state option for health insurance this week in Denver.

The meeting was a starting point for implementation of a bill signed by Gov. Jared Polis in mid-May. The new law requires HCPF and the Division of Insurance to develop and submit a proposal that describes, in detail, a state option for health insurance — and identifies the most effective implementation of such an option — to the Legislature by November 15 of this year.

The new law’s text details specific considerations and information the proposal must include and sets requirement for the process that’s beginning now, as the agencies meet with stakeholders and start to develop the proposal.

At this week’s stakeholder meeting, agency representatives presented an overview of what’s in the bill, took a look at what other states are doing in regard to launching a public option, went over lessons learned from failed CO-OPs, and discussed next steps.

“‘Make high quality health care access available to every Coloradan.’ That’s what it’s challenging us to do,” HCPF Executive Director Kim Bimestefer said at the meeting. “Maybe the uninsured rate is 6.5%, but it is not evenly spread. We’ve got certain areas that are over 15% uninsurance…in double digits — a lot of our rural communities.”

The meeting’s facilitator, at one point, mentioned that 40 people were in the room, with additional stakeholders calling in to participate. Attendees included payers, carriers, association representatives, brokers, advocates, and elected officials.

Rep. Dylan Roberts, who sponsored the bill that put the process in action, commented at the meeting that lawmakers envisioned a comprehensive stakeholder process.

“We envisioned a day like this, but to actually see it happen with so many diverse people here is incredibly exciting.”

Insurance Commissioner Mike Conway said that, while the report deadline is about half-a-year out, time constraints will actually be tighter. The agencies aim to finalize recommendations by mid-October and to get a draft out to stakeholders for feedback ahead of submittal.

“We’re really looking at four to four-and-a-half-months of time where we can actually do this work,” Conway said. “That is an incredibly short period of time.”

Requirements for the process — among several others — include that the agencies must:

Once the proposal is submitted for lawmakers to consider, the law requires the agencies and General Assembly to submit whatever federal waivers and/or state plan amendments needed to fund and implement the option as proposed — unless a legislator files a bill next session that alters the need to submit the waiver(s).

At the meeting, Conway elaborated that, given the federal landscape, the state may want to build out the plan so that a waiver wouldn’t be an immediate need.

In looking to other states, Conway gave an overview of options New Mexico has identified and mentioned that Washington State’s recently passed law launching a public option may be particularly promising for Colorado. 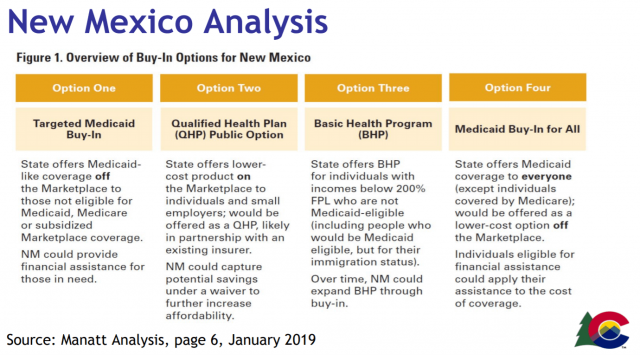 Conway said he thinks the key to Washington’s law, under which the state will contract with private insurers to offer standardized plans on its Exchange beginning in 2021, is that “the state doesn’t carry the risk.”

As for lessons learned from failed Consumer Operated and Oriented Plans (CO-OPs) created by the Affordable Care Act, Conway said there are two issues to keep in mind: that the CO-OPs depended on federal funding, and that their failure disrupted care for hundreds of thousands of people — causing, he said, a $110 million hit to Colorado consumers.

“Any time that we’re putting something together…anything related to a health plan that is going to be dependent on federal or state money, we have to be cognizant of the fact that there will be political games that are played with this and we need to be able to try and build protections around it, if that’s the direction we’re going to go,” Conway said.

Next steps for the agencies include gathering data to utilize as the process moves forward, which Bimestefer said is already underway with at least two consultants. Some stakeholders advised on more data for the agencies to collect, requesting detailed information on where costs are going up, breakdowns of what ages in the adult population are enrolling in what types of plans, and direct population comparisons with New Mexico and Washington.

Some of the money appropriated in the public option proposal bill will be used for actuarial work, but Conway said the agencies won’t be able to do “a lot.”

At the next meeting, scheduled for June 13, the agencies promised stakeholders more information on how that money will be used and the efforts that are currently underway. While that meeting will also be held in Denver, Conway said future meetings will take place outside of Denver — rural areas, the agencies made clear, will be part of the conversation.

“There’s a reason why Washington has a two-year runway for their plan,” Conway said. “Whatever we do, we’re giving enough time to actually make sure that we’re dealing with giving carriers, providers — everyone, consumers — the ability to react and be prepared for it.”

Slides from the presentation are available here, and a recording of the webinar is online here.