Colorado Health Institute (CHI) released its Climate and Health Index on Monday. The report highlights how climate change will impact the entire state and focuses on areas in Colorado that will be most impacted. The report also looks at the ways in which the change in climate impacts the health of people across the state. The study is the first of its kind in Colorado.

The goal of the report is to provide a guide for policymakers when drafting future legislation.

The climate is changing and temperatures are becoming warmer across Colorado, according to the report. While this makes the average temperature across the state higher, it also impacts the precipitation patterns, the air quality and the likelihood of devastating wildfires.

Wildfires have become more common in Colorado in recent decade, as the CHI report highlights. Last summer the Spring Creek Fire destroyed over 100,000 acres over several months. Before that, the Waldo Canyon fire destroyed 346 structures; it was the most destructive fire since the Black Forest Fire in 2013. These are just a couple of examples of the impact of the changing climate.

Not all communities are impacted in the same way, according to this study. Local policies, environmental factors, and individual demographics all play a role in these county-level differences. And, while most residents are aware of the impacts of these changes on weather patterns and ecological systems, they do not consider the impact on their individual health. This report attempts to educate Coloradans on the impacts on their health and their communities.

Here is how Coloradans’ health will be impacted:

The report reveals that the average temperature in Colorado has increased by two degrees Fahrenheit over the last 30 years. Temperatures could rise by five degrees by 2050.

If this occurs, older and younger populations, as well as people with chronic illnesses, will be most impacted. Asthma is one such condition that makes individuals particularly vulnerable to negative health consequences. In Colorado, wildfires cause some of the most dramatic impacts to one’s health. When temperatures rise, vegetation becomes drier, and wildfires become more likely and increasingly common. The air quality directly affects these vulnerable populations. 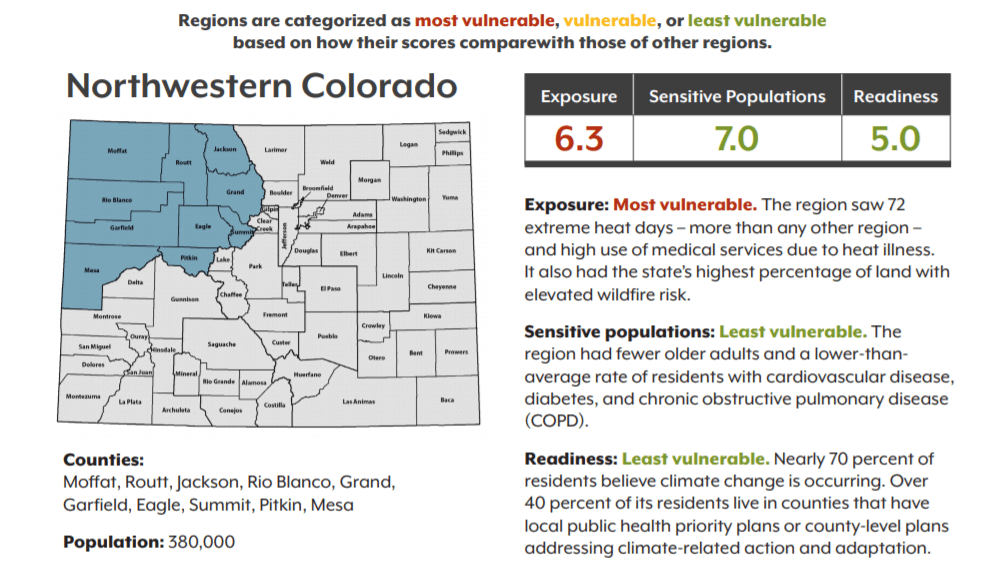 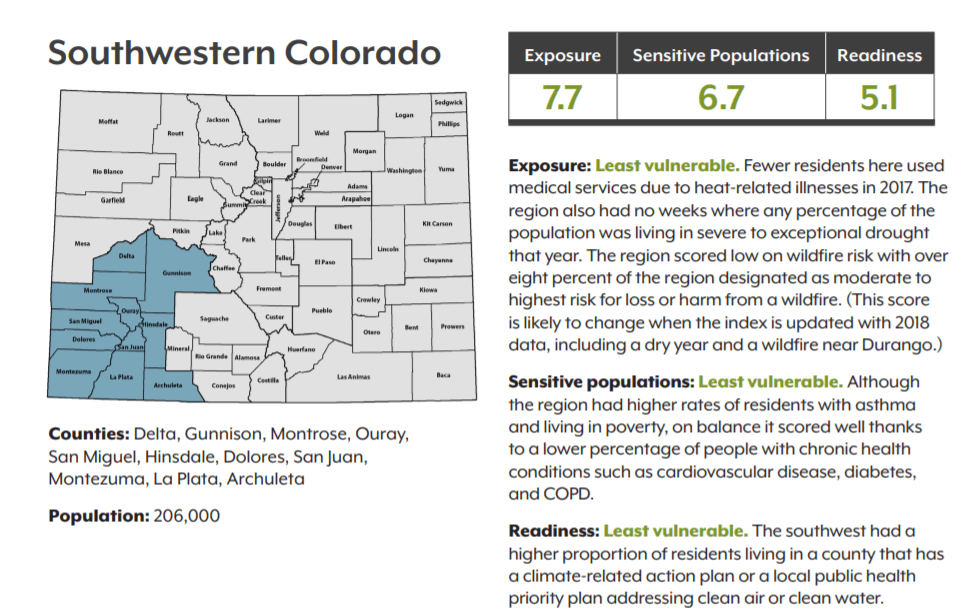 You can read more about the 24 factors analyzed in the report, here.

In the Southeastern part of the state, temperatures have risen steadily, leading to more heat-related visits to the emergency room. Demographically, this part of the state has a large population of older residents who are already struggling with health issues. The San Luis Valley, on the other hand, had the least number of extreme-temperature days, and no wildfires in 2018. This, combined with a younger population, makes this area the least vulnerable to negative health consequences.

Climate change looks different depending on where you live, the report reveals. With such diversity among individual counties across the state, policy responses must also be unique to the area.

The report suggests that policies aimed at climate change typically fall into two categories: adaptation and mitigation. While mitigation works to reduce the rate and impact of climate change, adaptation creates a plan to deal with it. Colorado counties have already begun to create policies in response to climate change. Here are a couple of examples:

You can read the full report published by Colorado Health Institute, here.