A just-released California Health Care Foundation (CHCF) poll finds large numbers of Californians have delayed needed health care since the start of the COVID-19 pandemic. The poll offers details on the disproportionate health challenges low-income Californians are facing and takes a look at respondents’ experiences with racial or ethnic discrimination.

The survey took place over the summer and includes data from 2,249 adults age 18-64 in California.

Since the start of the pandemic, 24% of low-income respondents (defined as individuals below 200% of the Federal Poverty Level) reported having experienced a health problem that they wanted to see a provider for. Nineteen percent of those with incomes over 200% FPL reported wanting to see a provider.

Of these individuals, the majority wanted to see a provider for a mental health problem such as stress, depression, or problems with emotions. This was true for over two-thirds of low-income respondents (68%) and over half (53%) of higher income Californians.

Those with higher income were more likely to say their mental health has remained unchanged (62%) compared to low income Californians (44%). 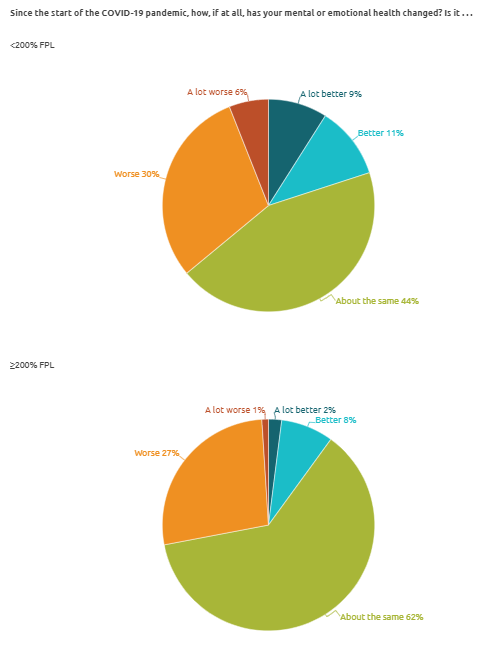 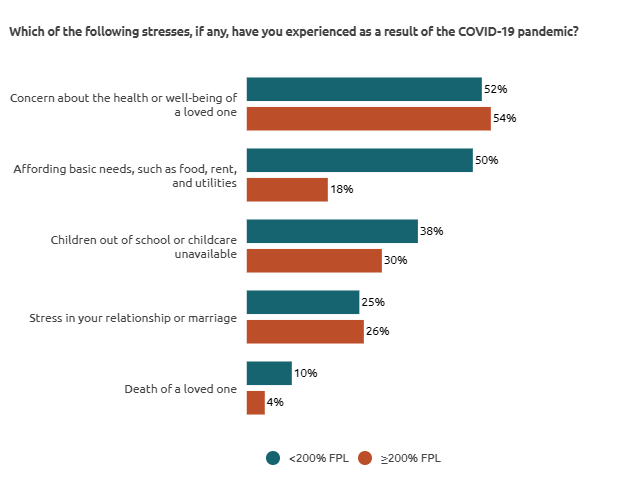 “It is becoming increasingly clear how many vulnerable populations are delaying the health care they need — with consequences that should concern us all,” says Carlina Hansen, senior program officer on CHCF’s Improving Access team. “Large numbers of Californians with low incomes especially are under serious stress, whether due to declining incomes or concern about their loved ones’ health. This is impacting everything from mental health to other health issues. Even in the midst of the pandemic, this survey highlights the next health crisis brewing among some of the state’s most vulnerable groups.”

The poll also asked respondents about their experiences with racism and the impact of racism on their health. Nearly 70% of Black respondents reported personally experiencing discrimination because of their race or ethnicity, followed by Asian respondents (43%) and Latinx respondents (43%).

These initial results represent a portion of the data collected in the CHCF poll. CHCF will release the full report, including complete details and analyses related to differences based on demographics like gender, race, and region, in early 2021.