The investments and changes for California health care in Gov. Newsom’s budget

California Governor Gavin Newsom unveiled a $209 billion budget proposal last Friday, and it includes many investments in and changes for health care in the state, especially in regard to Medi-Cal.

The budget includes $158.6 billion total, for all health and human services programs, with $64.8 billion in expenditures coming from the state. The biggest piece of the state-funding pie is allocated to the State Department of Health Care Services, which would receive roughly $34.7 million.

When all funding is considered, Medi-Cal claims a majority of the Health and Human Services funding pie, at 63.5 percent, which amounts to $100.7 billion. 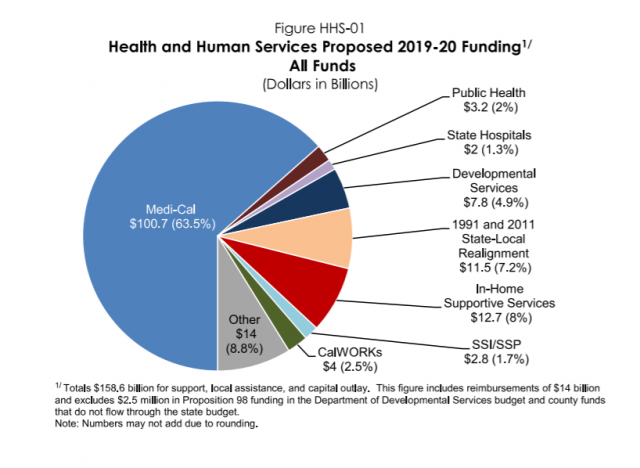 According to the budget summary for Health and Human Services, the budget for Medi-Cal will increase by $2.2 billion in 2019-20 over 2018-19, though Medi-Cal expenditures by the state are slated to decrease, which the proposal explains is partly due to the fact that the program “operates on a cash, rather than an accrual basis of accounting.”

“Over half of the remaining variance is due to updated data, including lower than expected managed care costs and ACA optional expansion caseload, and higher than expected drug rebate savings,” the proposal says.

The budget increase, in part, is due to an effort that’s largely seen as inching closer to universal coverage: Newsom is proposing expanding full-scope Medi-Cal coverage eligibility to young adults, regardless of immigration status.

He previewed that proposal in his first actions as governor, along with his plan to increase and expand subsidies through Covered California; that effort would be funded through a newly state-based individual mandate designed to keep younger, healthier people paying into the system, which would be modeled on the former ACA requirement.

New efforts at cost control included in the budget proposal for Medi-Cal involve transitioning to “all pharmacy services for Medi-Cal managed care to a fee-for-service benefit,” which would allow the state to negotiate for pharmaceutical manufacturers on behalf of “a much larger population of Medi-Cal beneficiaries.” The proposal says that such a transition would result in “hundreds of millions of dollars” in savings down the road.

It also establishes the “Medi-Cal Drug Rebate Special Fund,” which would hold rebates received by drug manufacturers for drugs dispensed and paid for by Medi-Cal — the fund would pay for health care services for Medi-Cal beneficiaries.

Other proposed investments in health care, beyond increases in Medi-Cal, include: