Committee scrutinizes how states plan to support themselves as federal funds winnow down.

Peter V. Lee, Executive Director of Covered California, joined a panel of six state-based exchange heads on Sept. 29 to respond to questions by the House Energy & Commerce Subcommittee on Oversight and Investigations.

Prior to the hearing, Rep. Timothy Murphy (R-Pennsylvania) stated that while state-based exchanges had been awarded more than $5.51 billion by the federal government, the “lack of oversight and management from the administration, [has left] a trail of broken systems across the country.”

The Committee’s objective was to hear testimonies of exchange leadership from California, Oregon, Massachusetts, Minnesota, Connecticut, and Hawaii. Then probe each state for its plans to manage oversight, sustainability, and recognized shortcomings.

Of the exchanges present, California and Connecticut were ahead of the bell curve with relative success in implementation. Lee testified to California’s active purchaser model and its effect in keeping rates historically low. He also discussed the 1.3 million lives covered through the Exchange with an additional 500,000 individuals moving to employer-based coverage.

“Exchanges across the nation are providing a safety net and weigh station for individuals moving into employer-based coverage with other options that they did not have before. We are the glue that is holding together the employer-based systems and public programs,” Lee said. He also added that exchanges are estimating about one-third of their population will turn over every year.

However, Rep. Murphy insisted that all exchange representatives be more critical of themselves. 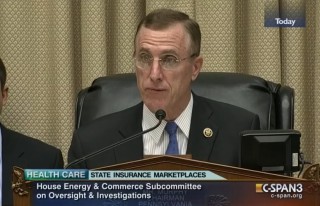 “From some of the testimony, it sounds like it’s all rainbows and unicorns. One of the things that this committee thrives on is testimony—that’s what we want to hear. There were some mess ups here. Some of them cost tax payers billions of dollars,” Rep. Murphy said.

When asked about long-term sustainability, Lee insisted that California’s exchange is sound.

“From day one, Covered California has been putting money in the bank from plan assessments while we were going through establishment funds. We have over 200 million dollars in the bank, a very strong balance sheet. We have a wholly sustainable model over the long-term,” said Lee.

While Covered California could not give Rep. Murphy a per enrollee cost assessment, Lee shared that the exchange has managed over 10 billion premium dollars and anticipates over 7 billion of premiums next year.

Also in response to Rep. Diana DeGette (D-Colorado), Lee stated that the largest challenge facing Covered California ahead is not financial but in consumer education and outreach.

“I would like to know about other costs and how your states are going to absorb these costs moving forward,” said Rep. Murphy.