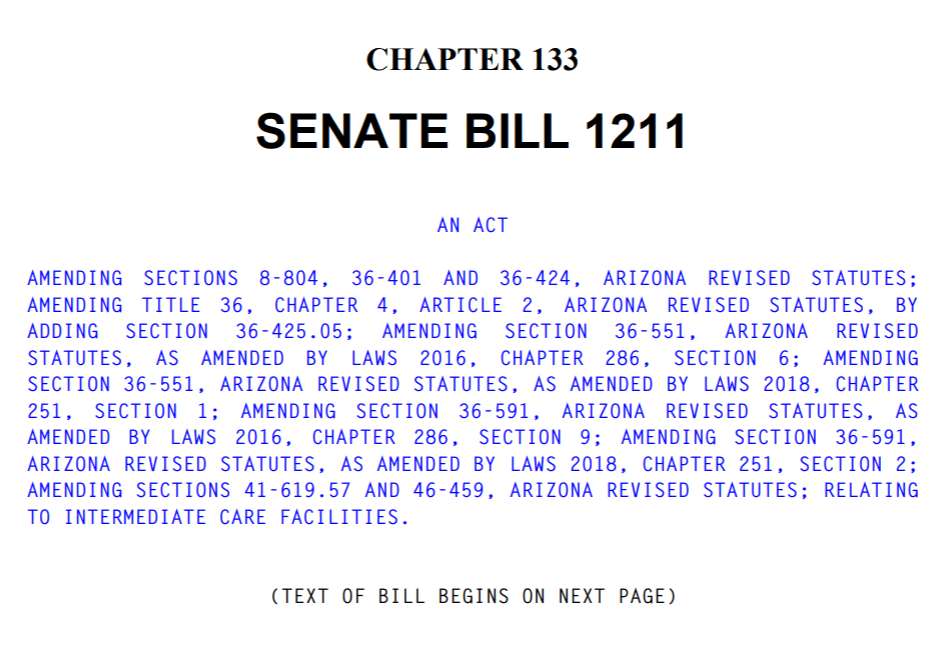 Arizona Gov. Doug Ducey signed a bill into law on April 24th establishing new safeguards for patients at Arizona’s intermediate care facilities. The bill, SB 1211, was drafted in response to an incident at a Hacienda HealthCare facility that occurred before session began.

Intermediate care facilities like Hacienda’s primarily provide care for people with developmental disabilities who need a higher level of care than basic room and board, help with activities of daily living, or general supervision and assistance in taking medications.

Hacienda began making headlines in January, after an incapacitated patient in one of its hospitals’ care gave birth. A timeline of Hacienda’s past and the events that followed this incident — including Ducey’s executive order calling for more protections for people with disabilities — is available via azcentral here.

Prior to the law’s enactment, facilities like Hacienda’s were certified by the Centers for Medicare and Medicaid Services, but weren’t required to have a state license. And, there was a loophole that allowed the facilities to skip routine inspections.

The new law, effective the date it was signed, sets up two key requirements for facilities like Hacienda’s where the incident occurred:

It also takes away the loophole that allowed skipped inspections and requires the Department of Health Services to adopt rules requiring employees at the facilities to report abuse, neglect, or exploitation in accordance with existing duty-to-report laws — like this one — that already require several types of health care workers to report such issues to proper authorities.

The actions included in SB 1211 were among the many recommended by the Arizona Developmental Disabilities Planning Council in its report on policy recommendations for preventing sexual abuse of Arizonans with developmental and other disabilities.

“This is a great first step to ensuring we have the proper protections in place in Arizona. We are grateful for the focus from lawmakers on both sides of the aisle and we hope their attention continues into the next legislative session. We still have so much more work to do to prevent sexual abuse.”

In a “What They’re Watching” video from earlier this year, McFadden shared that a missing piece in regulating these facilities is “changing the culture of care,” and preventing turnover in the direct-care workforce.

Whatever the next steps are, the Legislature’s work on the issue is likely to continue next year. Legislators have shared several ideas with State of Reform that aren’t addressed in the new law, at least a few of which are included in the ADDPC recommendations, as well.

In addition, the governor’s executive order called on the state to take several other actions following the incident at Hacienda, including a working group to submit a report to his office later this year on other possible steps.