As Arizona awaits a budget deal, what Gov. Ducey proposed for AHCCCS

It’s day 115 of what was supposed to be a 100-day session in Arizona, and the Legislature hasn’t yet introduced its funding package for FY 2020.

AZCentral recently reported that an agreement between the executive and legislative branches doesn’t appear to be imminent, based on Senate documents shared with The Republic. One area those docs showed the two branches may not agree: funding to prevent a KidsCare freeze.

According to The Republic’s reporting, Senate documents don’t allocate money to cover the freeze. The governor’s budget does.

KidsCare, what Arizona calls its CHIP program, provides affordable health insurance for upwards of 32,000 children from families that earn above the limit for Medicaid eligibility but below 200% of the federal poverty level.

The federal matching rate for state KidsCare funds is expected to drop from 100% to 90.5% in September 2019. A state law enacted in 2017 freezes KidsCare enrollment should the federal match drop below 100% — that means no new applications for the program would be accepted starting later this year.

If that happens, the governor’s budget predicts that 6,000 kids who qualify for the program will be unable to access coverage in FY 2020, with 26,000 kids losing coverage by 2022.

Gov. Doug Ducey’s budget plan calls for repealing the section of state law that freezes enrollment for KidsCare, and covers the difference in cost between the currently forecast population and the frozen population with $1.6 million in General Fund dollars for FY 2020.

“Without KidsCare, there is a real risk of Arizona families choosing to forego routine medical care for their children or, in order to qualify for Medicaid, reducing their working hours or ceasing to work altogether,” Ducey’s budget reads.

In total, the governor’s budget allocates $14.6 billion for all AHCCCS programs in FY 2020, representing a $830.8 million increase in spending over FY 2019 — however, the budget also represents a $334,700 decrease in funding from the state’s General Fund.

That decrease is something Joint Legislative Budget Committee (JLBC) staff Patrick Moran brought up at a House Appropriations Committee meeting earlier this session, when he presented on the executive budget’s funding for AHCCCS in comparison to the JLBC Baseline projections.

Note: According to the Legislature’s budget explainer, JLBC’s Baseline document reflects a consensus economic forecast and spending estimates “based on funding formula requirements and other obligations.”

The JLBC Baseline document for FY 2020 projects a need for $3.9 million in additional General Fund appropriations for AHCCCS — far from the decrease the governor requests. 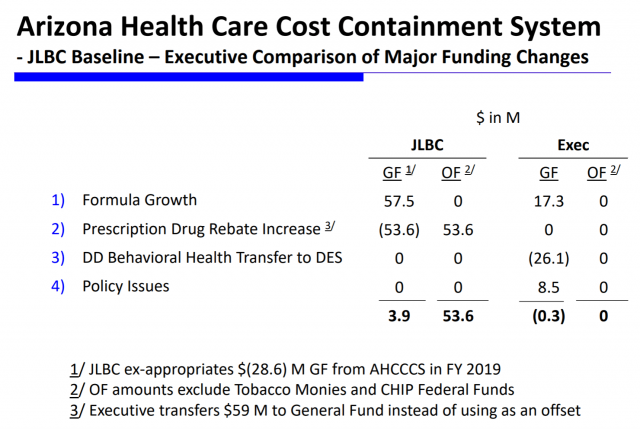 Moran explained the differences between the two documents, numbered one through four above, item by line item:

The governor, Moran said, accounts for no growth in FY 2020, and “less than 1 percent thereafter.”

While rebates from drug manufacturers from drugs utilized by AHCCCS enrollees have traditionally been appropriated to the AHCCCS budget, Moran explained, the governor instead calls for a transfer of $59 million to the general fund for FY 2020. JLBC’s Baseline includes the traditional practice of putting it back into AHCCCS.

The $26.1 million reduction in the governor’s budget is referring to transferring funding for behavioral health services for developmentally disabled clients who aren’t part of the Children’s Rehabilitative Services program from AHCCCS to the Department of Economic Security.

JLBC considers that transfer of funding neutral in its document, since it’s going to a different agency rather than going away altogether.

In addition to the eliminating the KidsCare freeze, Ducey’s budget funds the following policy efforts:

One unknown Moran mentioned: fiscal impacts from the recently federally approved work requirements that are slated to go into effect January 1, 2020. He said the requirements will likely apply to 120,000 adult enrollees.

The program, Moran said, would not kick people off coverage permanently for not complying with work requirements, but would suspend them for two months if noncompliant, then automatically re-enroll them in coverage.

Costs of implementing the new requirements will include an “AHCCCS Works” portal that will serve as the mechanism for enrollees to report compliance — but, the impact of that and other administrative costs are so far unclear.

Whether the final budget compromise will look more like the governor’s or the JLBC baseline document — and whether it will attempt to predict costs of future work requirements — is yet to be seen.

The slide deck from Moran’s full presentation to the Appropriations Committees is available online here.