Next week, we release our list of speakers lined up for the 2019 Arizona State of Reform Health Policy Conference. It’s a great group of some of the most thoughtful folks in Arizona health care and health policy, timed following the (fingers crossed) end of the legislative session. This year’s event is May 23rd.

Till then, here are 5 Things we think are worth keeping an eye on or knowing in Arizona health care and health policy for April, 2019.

With help from Sara Gentzler

The deadline for committees to hear bills from the opposite chamber has passed, and the Legislature is now quickly approaching the last day for Conference Committees. Several consequential health care bills are still in-play.

A few highlights: Sen. Heather Carter’s telemedicine parity bill is now headed to the governor’s desk, a bill addressing the state’s physician shortage passed through the Senate and both House committees, the Senate passed a bill aimed at preventing sexual abuse of Arizonans with disabilities, and a bill regulating pharmacy benefit managers made it through both chambers and is now headed back to the House.

Speaking of regulating PBMs, HMA Principal Anne Winter shared her insight on possible repercussions of pharmacy-pricing reform in a recent edition of “What They’re Watching.” Winter will also be joining us May 23 at our 2019 Arizona State of Reform Health Policy Conference as part of the “Costs and Benefits of PBMs and Pharmacy in 2019” panel.

“What I know about the PBM industry is they can pivot very quickly,” Winter says. “This is not going to be something that is going to impact them dramatically, from an operational perspective. It might hit their margins a little bit, but they are very nimble, and they’ll be able to figure out how to fix that. Because they are such a nimble industry, I don’t see it impacting them as much as their provider network.” 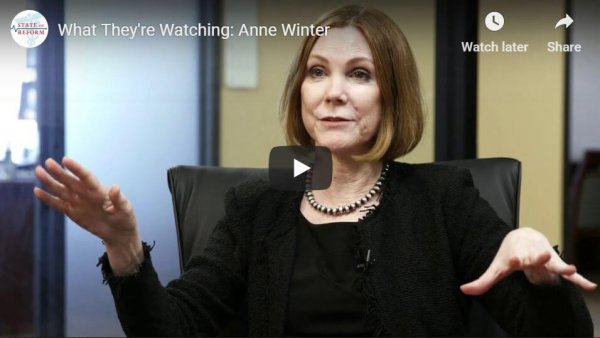 The Arizona Hospital and Healthcare Association named Ann-Marie Alameddin as its new President and CEO. Alameddin was previously the association’s Vice President of Strategy and General Counsel.

She takes the place of Greg Vigdor, who served in the position for six years. Vigdor recently sat down with us for a video interview, where he talked about his work on critical issues like Medicaid expansion and questions he has surrounding Arizona health care as he moves forward. Those revolve around the future of Medicare, rural health care in Arizona, and disparities in care.

National nonprofit FAIR Health recently released its second annual white paper, using data from a repository of over 28 billion claim records to analyze trends in place of service for health care. Data shows the utilization of alternative places of care, such as retail clinics and telehealth, continues to rise in the United States.

Reporter Emily Boerger spoke with FAIR Health President Robin Gelburd about her key takeaways from the white paper. Gelburd will share Arizona-specific data when she presents as one of the keynote speakers at our 2019 Arizona State of Reform Health Policy Conference.

Briefing materials from a recent Finance Advisory Committee meeting show that growth in revenue from the tax on capitation payments to AHCCCS contractors is slowing. The forecast says that the growth of 10.7% in FY 2014, 23.7% in FY 2015, and 17.2% in FY 2016 was “largely driven by the expansion of eligible income levels for the program” in 2014.

“Growth slowed to 1.2% in FY 2017 and dropped below 1% in FY 2018 as enrollment slowed,” the materials read. Still, collections from that tax made up about 42% of all insurance premium tax General Fund revenues in 2018, bringing in nearly $213 million. Something to watch: Whether or not work requirements and the absence of the individual mandate penalty will impact this revenue source and its growth in the future.