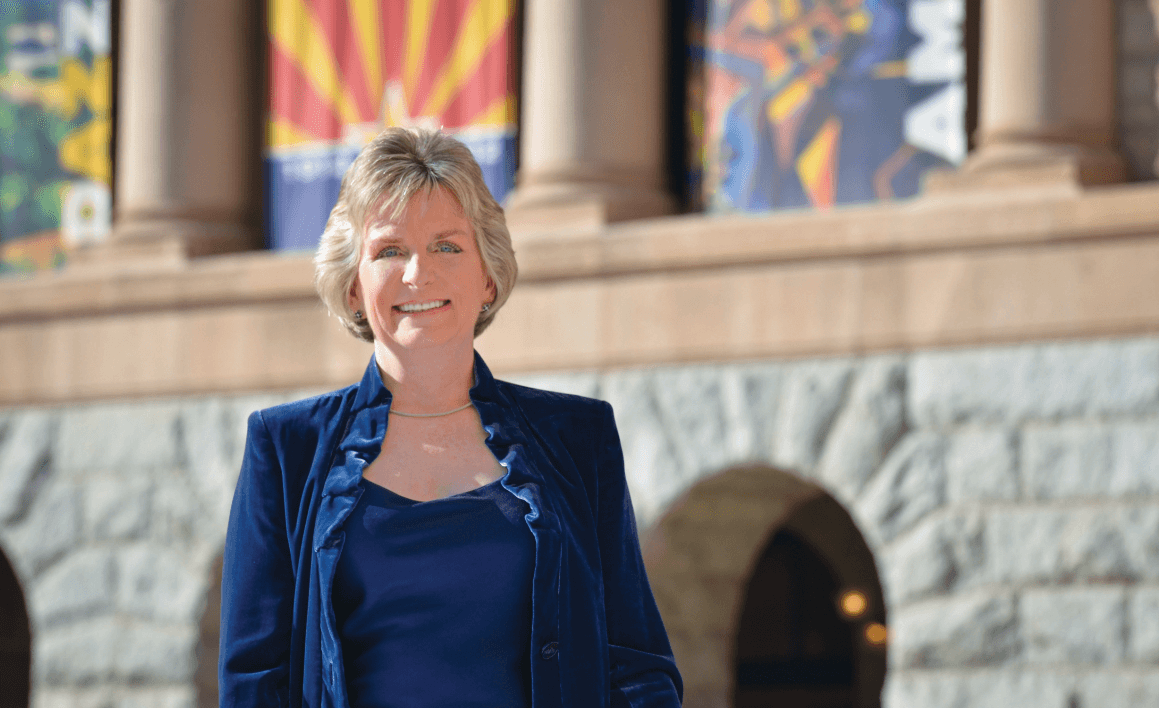 Sen. Kate Brophy McGee represents the 28th Legislative District in Arizona, which covers North Central Phoenix, Biltmore, Arcadia, and Paradise Valley. Brophy McGee served in the House for six years before serving in the Senate. She’s now in her second term, and Chair of the Senate Health and Human Services Committee. She also sits on the Education, Higher Education and Workforce Development, and Ethics Committees.

Sara Gentzler: I’ve read that you have a reputation for being somewhat inclined toward bipartisanship. I think, even, one publication called you “moderate” within your party. Senate Bills 1249 and 1047 might be examples of that this year.

Kate Brophy McGee: Yes. Out of the 30 districts in Arizona, mine is by far the most competitive. The district is split, with two Democrats in the House. And I’m just starting my ninth year serving the district, my second term in the Senate.

The district is very sophisticated. The highest number of voters are Independent, followed by Republicans, then Democrats — all of those are separated by about 10 points, give or take. And a lot of CEOs, executives, and professionals live in the district, including many health care leaders.

They expect problems to be solved. They expect both parties to work together. My constituents follow the Legislature very closely.

I think I’ve always been bipartisan. I think the best decisions are decisions made that members from both parties can support. And I tend to drive toward what I sometimes call “the miserable middle,” to put together consensus and compromise around tough issues.

SG: Does that translate to your role as Chair?

KBM: Very much so. True confessions: I served on a school board for 10 years. That was my first foray into public policy, and that is a non-partisan board.

So, I guess I never really stopped to ask people if they were Republican or Democrat. We just worked together to solve problems. That’s the training that I took into the Legislature and was quite thrown off by the Republican/Democrat stuff I bumped into.

So yes, and I am happy to consider bills on the basis of policy. That’s how I roll as a policy maker.

SG: Shifting gears: In a conversation with Rep. Nancy Barto a few weeks ago, she named expanding opportunities for people to buy short-term health insurance plans and expanding the availability of association health plans as top priorities in the House. Sen. Heather Carter talked about moving on bills that have been cooking over time. What topics have risen to the top for you?

KBM: Certainly the telemedicine issue, which I think we’re going to finally resolve and make available statewide on all specialties — assuming Heather’s bill gets through.

And I’m working on a public health issue related to maternal mortality and morbidity. There is very much an uptick in deaths and serious illness and injury to mothers in the process of labor and delivery. The United States has the highest rate of those instances of any developed country.

So, I’m working on advancing the issue in Arizona: commencing with collecting the data, making sure we have all the data, and getting the experts together to figure out how we lower our rates. That was brought to me by a constituent who lost his daughter.

I’m really excited about it. It’s really my first public health initiative as chair of the Health and Human Services Committee.

Nancy mentioned association health plans, and I have worked on that issue with stakeholder meetings over the summer and into session. So, that bill is going to come forward. I think it provides alternatives to constituents; the deductibles are high, and if they aren’t subsidized, they can’t really benefit from Exchange plans. I think we’re almost there on that legislation. I’m grateful Rep. Barto signed onto it with me.

There are those types of issues, the typical scope-of-practice wars, and ongoing concerns with the pharmacy benefit managers. Between Sen. Carter, Rep. Barto, Rep. Cobb, and me, we have some very experienced health and human services legislators. So, there are a lot of policy issues going on.

One other thing I could put out there is: There’s always been a lot of talk around resolving homelessness. That’s more on the human services side, but it plays a role in opioid addiction and the mental illness and behavioral health issues we deal with on an ongoing basis. I think we are working hard to put ourselves in a place, as a state, where we’re not where San Francisco, Portland, and Seattle are. I’m hopeful that we’re far enough ahead in the work that’s being done on the issue.

SG: It sounds like there are quite a few areas where real progress is tangible and possible.

I spent the last four years with legislation to fill in the gaps around the Central Registry — who can be checked and where they can be checked. I think it’s really starting to pay dividends, because you don’t want to put dangerous people with vulnerable populations.

That work is coming into play in the Hacienda situation and also the Southwest Keys situation. We have a Central Registry that can yield so much information and stop any bad people from getting access, which is always what predators want. So, I’m pretty pleased about that.

SG: On bills where things might be more split: In my recent interview with Rep. Barto, she said she was concerned about over-regulating vaping. You’re co-sponsoring a bill that would regulate vaping. Are you concerned about that?

When you look at these vaping companies, the tobacco companies are buying them. High school kids are vaping. It’s really Heather, who has a teenage daughter, who picked up on that. This is a real safety issue.

I guess I don’t understand about “over-regulating vaping,” I think you have to regulate it appropriately, as a nicotine product that can cause addiction.

SG: We’ve already covered the Hacienda issue a bit — do you want to talk about the Southwest Keys situation? Do you see that as a health care issue?

KBM: In some ways, the two are mirror issues in terms of revamping their licensure status. They are complicated bills because licensure is complicated.

The stunning difference between Hacienda and Southwest Keys is: Hacienda’s vulnerable patients are our charge, as the state. Southwest Keys’ vulnerable little tenants in these shelters are wards of the federal government. We cannot take these kids, we only have jurisdiction over the facility and we have tightened that up considerably. And we are requiring, via the Central Registry, that every individual who works there must have their fingerprint clearance card and must be cleared through the Central Registry.

With Southwest Keys, I think these children come here under very traumatic and difficult circumstances. And horrible things happened to them on the way here.

Obviously, that involves health and behavioral health concerns. But, ultimately, the Office of Refugee Resettlement and the federal government has custody of these kids. Our role is restricted to ensuring that, if they are within the boundaries of our state and in a facility licensed by the state, the facility is safe and the people working with them are safe. It’s a very sad issue.

SG: There seem to be a lot of heavy issues your committee is dealing with.

KBM: You know what, I love doing this. My husband is so wonderful. Every morning I come down to the Capitol, he kisses and hugs me and says, “Now go down there and do good things.”

And I really think, certainly in the Health and Human Services arena — whether you’re Rep. Barto or Sen. Carter or Rep. Cobb or whomever — we’re all just determined to do good things for the State of Arizona and beyond.

SG: And on that note: Anything else you want to add?

KBM: I’m working on hands-free legislation, which would be — in essence — a texting ban. That is a public health crisis, as well.

The victims of distracted driving, people who have been texting instead of looking at the road, say it is the DUI of our generation. I never want to say for sure, but I think we’ve got the traction this year. Unfortunately, it took another horrible tragedy. But you try to get some good out of it.