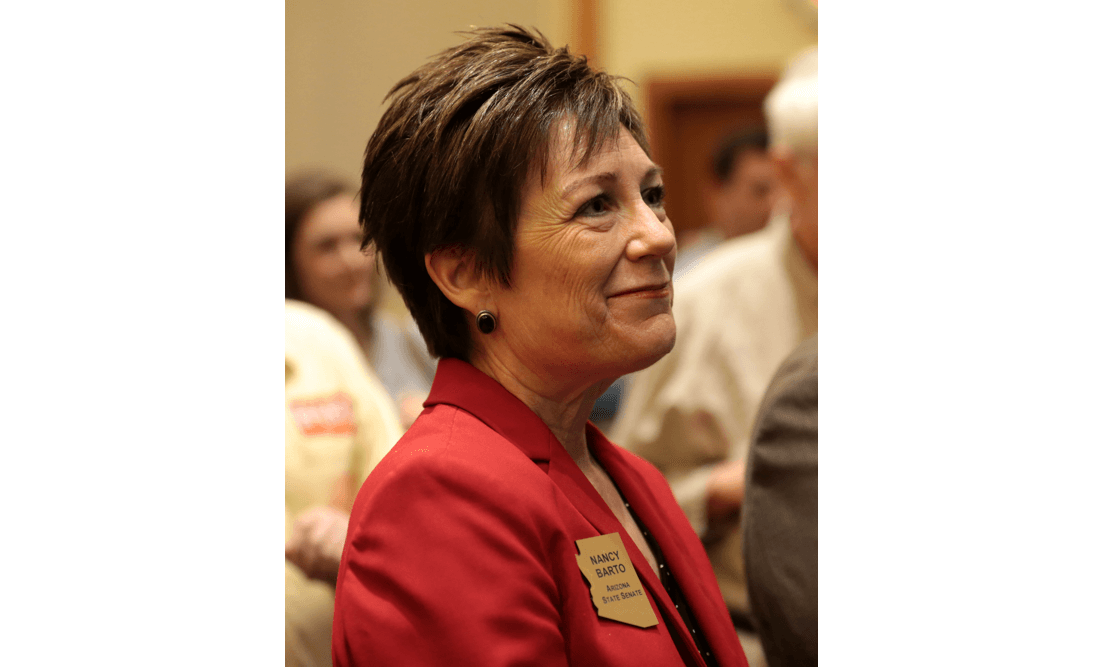 Rep. Nancy Barto represents Arizona’s 15th Legislative District, which covers a piece of Northeastern Maricopa County. Barto served in Arizona’s House of Representatives for five years before being elected to the State Senate in 2010 — now, she’s back in the House. She chairs the House Health and Human Services; last year, she chaired the Senate equivalent.

For this Q&A, State of Reform talked with Barto about what issues she expects to come in front of her committee this session, bills she’s working on, the new possibility for putting work requirements in place for Arizona Medicaid members, and what she’s watching in Arizona health care.

Sara Gentzler: What health care-related issues do you expect to be central to your committee’s work this session?

Nancy Barto: Two really big ones, in terms of providing more affordable health insurance to Arizonans, based on the new federal rules that allow more flexibility for states:

We will be working on expanding the opportunities for people to buy broader, short-term plans. That’s a really viable solution for a whole host of people that fit into the kind of category that would be helped by such. That’s huge. They’re a whole lot more affordable. It can be 80 percent lower-cost than regular, individual insurers in Arizona. They don’t have the enrollment barriers that there are in the ACA plans, and, potentially, there’s broader network choices for people. We, right now, have 21 short-term plans, but they’re limited to three months with renewability of only six months. So, the plan is to expand them to the level that the federal government allows: up to 12 months, with a three-year renewability. That’ll help people that are transitioning out of welfare or leaving their parents’ plans or they’re not quite eligible for Medicare — that type of thing. Or even just because they’re uninsured because they can’t afford to pay the premiums in the individual market. So that’s a big one.

The other one, on that score, is expanding the availability of association health plans. Because so many small businesses are left out of that opportunity to stand together, so we’re going to try to give more and more small businesses the bargaining power of large companies.

SG: Do you foresee either of those — or any other issues — being especially contentious in the committee?

NB: They shouldn’t be. I think you’re going to hear some of the same criticisms that we hear: That they undermine the ACA, that they’re too skinny, or whatever. But I think the popularity and the need to meet the need for flexibility is going to outweigh any kind of backlash that’s going to be drawn. Yeah, there will be some criticism, but I don’t think it’s warranted.

SG: What can constituents expect from your bills this year?

NB: They can expect to have more opportunities for lower-cost health insurance, for sure, which is going to be very powerful and popular. In Arizona, small businesses’ offer rate for insurance dropped 45 percent since 2010. More small businesses stopped offering insurance than started, due to the mandate. So, you know, there’s a real need.

SG: Are there any bills you’re working on or that you’ve already introduced this session that make you especially proud or excited?

NB: I’m very excited about solving some mental illness issues. I haven’t dropped those particular bills yet. They might actually not need legislation, per se. But we’re working on that. We, like a lot of states across the nation, are concerned about our incarceration of the seriously mentally ill. And the homeless population in Arizona is increasing in Maricopa County at a higher rate than other states. So there’s a huge emphasis on solving homelessness, reducing recidivism, and public safety. And all three of those issues are integrally related to untreated, chronic, serious mental illness.

So we are working diligently to ensure that there are more appropriate facilities for this particular population. Arizona spends $2.2 billion — with a “b” — every year in our behavioral health system. And yet, a third of those that are incarcerated in Arizona are mentally ill. And 35 to 40 percent of our homeless population is mentally ill. Fifty percent of mass shootings have a nexus with a person with untreated mental illness. These three situations all point to: We’re failing this population on the front-end. So we’re looking at public-private partnerships to start pilot programs to meet that need.

SG: It sounds like those may or may not show up in the form of bills from you this session, but that they’re definitely priorities?

NB: Yes, they are big priorities for many members. But we’re trying to identify the funding sources that are appropriate, in terms of grants, in terms of locations — the state hospital campus in Arizona is [on] 93 acres, there’s a lot of beds that need minimal changes in order to accommodate such a facility. And so, it’s just a matter of getting it done.

SG: I know you sponsored SB 1092 back in 2015, which ultimately, recently opened up the possibility for Arizona to put in place work requirements for Medicaid members. What are your thoughts on the CMS approval of the community engagement requirements?

NB: Well, it’s been a long time coming. We passed that bill in 2015. We were the first state to actually pass that, [ to] require our Medicaid program to make the waiver request for CMS. I think we were very forward-thinking in forwarding the goal of making sure that we’re transitioning people from welfare to work in parts of their health care.

And it took us longer because we had a provision in our waiver request that exempted the tribal communities. So, CMS had a problem with that, and it took us longer for them to navigate those issues. But, I think it’s a step in the right direction. When people are held accountable, sometimes they need some encouragement that’s going to help them take those steps. There’s a lot of exemptions for the populations you would expect there to be exemptions for. Like the seriously mentally ill. They’re one of the most vulnerable populations. So there are others in those types of camps where you would just say “Let’s start with the healthier population that you would hope would be able to easily meet the requirements. And if they can’t, then maybe they’re not really supposed to be on the program.”

SG: Are there any issues — I’m thinking of, recently, the incident at Hacienda — you’re keeping an eye on in the health care?

NB: I’ve always been concerned about state care, mostly; Hacienda would fall into that category. Those are contracted providers of the state. I think the most vulnerable who are dependent upon that type of care, whether they’re in an ICF or in a regular group home, there’s concern all-around that we do a better job making sure that the oversight that we have in place is effective.

I’m not sure how to address the Hacienda one, but one possible solution is allowing families to request video monitoring for their family member if they choose a certain facility. I think it’s a viable option, because they can’t be next to their loved one 24/7, and I’ve heard the same types of concerns and requests from families that have their family members in a group home.

We have this thing in Arizona called Independent Oversight Committees, and they receive incident and accident reports over these group homes. And they’ll receive a report, they’ll have to give it to Adult Protective Services to investigate it; by the time APS gets to it, the evidence is gone and it comes back to the oversight committee as being unsubstantiated and there’s no accountability. We need to close the loop on that situation. Whether it’s re-evaluating whether APS can handle those types of cases and investigations, or if another entity needs to do those investigation so APS isn’t overloaded. But concerns like that, raised by these Independent Oversight Committees, have been around for awhile. And it’s time we come up with solutions to make sure that they’re protected.

SG: Is there anything else you wanted to mention that you’re keeping an eye on, as far as the private sector?

NB: I’m doing some legislation on the health board, too. There was an investigation on the impostor medical professionals in Arizona by ABC15 that revealed that health boards really don’t deal with medical impostors in this state in a very uniform way, so we’re going to be hearing a bill next week that will give them some more guidance on how they can deal with it: How they have to take the complaint, number one. If there’s a complaint about a person that’s posing as a nurse or a doctor, some boards are really good at taking the complaints and coming up with a plan of action, sending a cease-and-desist order; and others won’t even take the complaint. So we’ve got a pretty comprehensive bill to address that.

SG: Is there anything else you’d like to add?

NB: With the vaping issue, I’m concerned about over-regulating the industry in an effort to keep minors from accessing electronic cigarettes and such. So I’m going to be watching carefully any kind of legislation that comes my way on that. They’re 95 percent safer than sticks, than cigarettes. We need to make sure that the public isn’t hampered and that we’re sending the right message as we deal with certain situations. Vaping still is a lot better for you. It might be addictive, with nicotine, but that’s a whole lot different than cancer-causing smoke and carcinogens, and other cancer-causing ingredients in cigarettes and cigars. They’re smokeless vapor, so I’m concerned a little bit about over-regulating in that space.