The latest on COVID-19 related job losses in Alaska

The June issue of Alaska Economic Trends from the Alaska Dept. of Labor and Workforce Development takes a deep dive into job losses and trends during the COVID-19 pandemic.

April job numbers dropped 13.1 percent compared to April of last year – decreasing from 322,500 in 2019 to 280,300 jobs in 2020.  According to Trends, the closest Alaska has come to experiencing a loss of that size was in 1977 when employment fell 11.7% following the completion of the Trans-Alaska Pipeline.

The report also notes that since at least 1960, jobs have always increased from March to April in Alaska with the addition of seasonal workers. But this year, April’s job numbers declined by 40,000 compared to March.

Dan Robinson, chief of Research and Analysis at the Alaska Dept. of Labor and Workforce Development, says the pandemic makes it difficult to evaluate the future impacts of these job losses as the factors that led to the declines are different than anything experienced in the past.

“Job losses caused by the pandemic and efforts to slow its spread differ fundamentally from those caused by economic bubbles and temporary imbalances in market forces, which are the typical reasons for large-scale job losses and recessions,” writes Robinson.

“Because April’s losses were mostly linked to mandatory government restrictions that have since been lifted, some of the April losses could quickly reverse. Looking at the April numbers in detail can help clarify what we’re likely to see for May and June.”

From April 2019 to April 2020, job losses were substantial for all major sectors in Alaska’s economy, most notably in the leisure & hospitality and retail trade sectors. 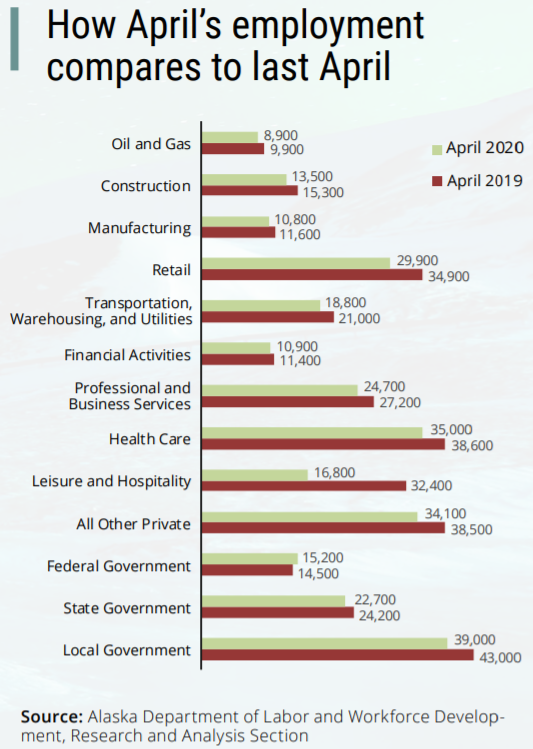 The report states that over 48,000 people received a weekly unemployment insurance payment in April. Of that group, the health care and social assistance industry (5,900 claims) accounted for the third largest portion. The majority of those claims came from dentists’ offices (1,273), doctors’ offices (682), and hospitals (637). 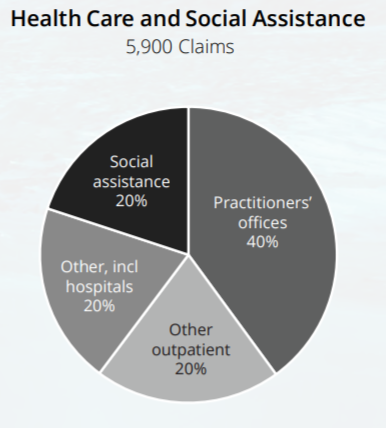 Robinson says May data will likely show large job losses again, but the numbers in June will give the state a better sense of how quickly jobs are returning. He also writes that some types of jobs — like those in the health care sector — will return quicker than others.

“Some types of jobs will bounce back faster than others. Health care providers, for example, primarily serve Alaskans, and consumer spending on health care procedures and services is less discretionary than spending on new furniture, a new car, or a restaurant meal,” writes Robinson.

He predicts tourism-dependent jobs largely won’t return before 2021, and that it may take more than a year or two for tourism to return to normal. Robinson says to watch the jobs that depend on in-state consumer and business spending which will indicate the speed at which the economy will bounce back. State and local government jobs will also play a key role in economic recovery, he says.

The June Trends edition also includes a look at the history of ups and downs in the oil industry, and what is different this time amidst the pandemic.