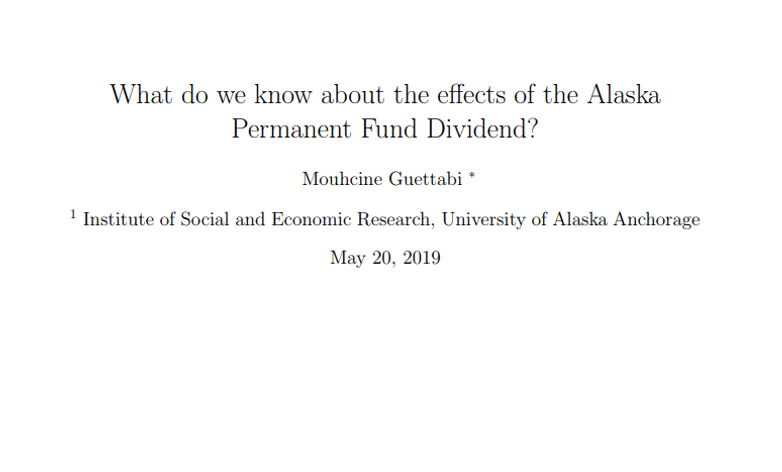 New paper evaluates the impacts of the PFD on health

A new study out of the Institute of Social and Economic Research at the University of Alaska Anchorage evaluates the impact of the Permanent Fund Dividend on various socio-economic outcomes in Alaska. The study looks at the PFD’s effect on employment, income inequality, health, crime, and consumption.

Alaskans began receiving their yearly PFD check in 1982. Since then, annual payments have ranged from about $300 to $2100 per Alaskan. Intense debate about the function and size of the dividend has intensified in recent years as Alaska continues to face financial difficulties.

According to the report, the debates and conversations around the PFD are difficult because there has been a lack of empirical research on how the PFD impacts the lives of Alaskans. The new paper summarizes previous research on the PFD.

In terms of health, the report points to two studies that show that the PFD improves children’s health – both in terms of increasing birth weight and lowering childhood obesity.

A 2016 study highlighted in the report found that income has a positive, but modest effect on birth weight. The authors of the study found that an additional $1,000 increases birth weight by 17.7g and results in a 14% decrease in the likelihood of a low birth weight. This effect was even more pronounced for less educated mothers. They also found that the additional income resulted in modest improvements in APGAR scores which measure infant health.

A second study highlighted in the report shows that an additional $1,000 decreases the probability of being obese as a child by 4.5 percentage points. When applying these results to all Alaskan three-year-olds, approximately 500 cases of obesity were avoided due to $1,000 in PFD payments.

“Using a simulation exercise, they find that the state of Alaska saves between two and 10 million dollars due to the averted cases. Furthermore, they find that the results are driven by toddlers in families earning between ($25,000-$75,000) and find no effect for low and high income households.”

Other findings in the report show that the PFD has resulted in poverty reductions for rural Alaska Natives — particularly for the elderly. A 2018 study found that in 2000, the PFD brought 12.4% of the rural Alaska Native population out of poverty. That percentage decreased to 6.1% for 2011-2015.

However, not all impacts of the PFD are positive. Research also shows that the PFD worsens income inequality in both the short- and long-term. A separate study that found that in the 4 weeks after the PFD is issued, there is a 10% increase in substance abuse-incidents. They also found that substance abuse and medical assist instances increase as the payment size increases.

While this recent literature has started to shed light on the influence of the PFD on certain socio-economic outcomes, many factors remain unknown.

“There are still significant gaps in our understanding of the role the PFD plays in influencing education, health care usage, financial health, migration, and general welfare. In the years to come, there should be a strong push to use detailed administrative datasets to evaluate the long term effects of the program,” reads the report.

The report recommends looking at how additional income impacts health care usage. This could include looking at treatment and the use of preventive or diagnostic services. Future studies could also evaluate the type of care pursued by Alaskans when a health incident occurs around the time the PFD is distributed, versus when the additional income is months away.

Additional studies might evaluate the impact on educational opportunities, migration patterns in and out of the state, and the PFD’s potential role in increasing access and usage of health care by those in rural parts of the state.