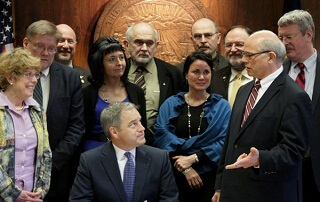 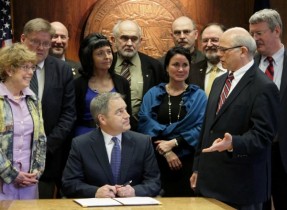 Alaska Gov. Sean Parnell signed a bill yesterday that will limit the circumstances when doctors can deem an abortion “medically necessary” for the purposes of getting the cost of the abortion covered by Medicaid.

Under the federal Hyde amendment, Alaska cannot fund abortions using federal Medicaid funds except when the abortion is deemed medically necessary by a physician or when a pregnancy is the result of rape or incest.

Senate Bill 49 requires doctors to choose a reason for the procedure being “medically necessary” from an approved list of 21 reasons why a pregnancy may be a “serious risk to the life or physical health” of a patient.  The list includes eclampsia, pulmonary hypertension, epilepsy, congestive heart failure, and coma.

The measure states that “payment may not be made for an elective abortion.”

A catch-all provision in the law states that an abortion can be performed for “another physical disorder, physical injury, or physical illness, including a life-endangering physical condition caused by or arising from the pregnancy that places the woman in danger of death or major bodily impairment if an abortion is not performed.”  The list does not include anything about the patient’s mental health.

Both the House and Senate approved the bill earlier this week.

The Alaska Dispatch reported on Monday that state Sen. Hollis French, D-Anchorage, predicted during floor debate that the bill “will never go into effect because it’s contrary to our Constitution.”

In February, the state Department of Health and Social Services tried to implement the “medically necessary” criteria through administrative action, but a state Superior Court judge blocked it with a temporary restraining order.

Alaska Public Radio reported last night that “the new law is expected to be challenged in court,” and noted that “Planned Parenthood and the American Civil Liberties Union are already suing the state over the existing regulations, arguing that they violate the Constitution’s equal protection clause.”