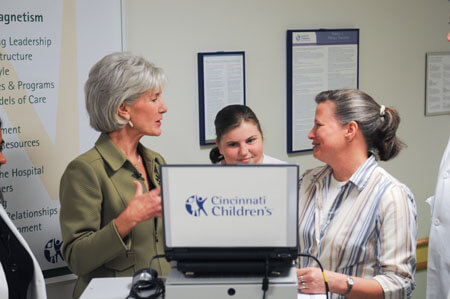 Federal Exchange: “We’ll Be Ready. No Matter What.”

The HHS budget released yesterday calls for $1.5 billion to implement (at least in part) the federal exchange for 33 states. Despite Republican’s ongoing refusal to increase funding, with some creative financing HHS maintains “we’ll be ready. No matter what.”

To pay for the $1.5 billion HHS expects to spend on the law this year, Murray said it will exhaust the approximately $235 million left in the law’s original implementation fund. Sebelius can  draw down or shift money around from certain accounts, and Murray said HHS would get about $564 million that way, mostly from something called the Non-Reoccurring Expense Fund.

And to fund the race down the home stretch, the agency is dipping into what Republicans have criticized as a “slush fund” in the health care law itself, the Prevention and Public Health Fund. Obama health officials did not specify Wednesday how much they were taking from that fund. It originally included $15 billion over 10 years, but it was cut by $5 billion in a deal to extend the payroll tax holiday last year.

Finding funding for the remainder of the year is just part of the battle. Even after the implementation funding is exhausted, the prevention fund raided and other funding shifted, HHS still needs to secure another $2 billion next year.

Obama health officials could not say Wednesday how they would scrounge up the $2 billion they want to spend on the exchanges next year if they are jilted by Congress again. They expect to collect $450 million in fees from insurers on the exchange next year, but where the rest would come from is anybody’s guess.

“I think this is an ongoing conversation with Congress,” said Sebelius, who said the department has been shrewd with the money already at its disposal.

It’s not just a matter of money but also workforce. The IRS alone asks for about 2,000 new workers to implement the law’s tax provisions. HHS asks for another 280 employees, a request partially driven by its new health law responsibilities.

But with less than six months until people are supposed to be able to start enrolling in the exchanges and find out whether they receive a federal tax credit to subsidize their coverage, the administration’s refrain is the same:  We’ll be ready. No matter what.