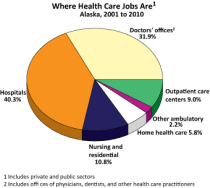 Last week, the Commonwealth North Health Care Action Coalition was briefed by Dan Robinson, Chief of Research and Analysis with the Alaska Department of Labor and Workforce Development, on the newly released occupational forecasts for 2010 to 2020 as it relates to health care and an aging population.

Robinson noted that Health & Social Services jobs are growing at much higher rates than other sectors. Personal care aides and nurses are the fasted growing professions in Alaska and home health is close behind in fourth.

This growth is not new, he says. It was the same way in the 1990’s. The difference is, back then, we didn’t think it was a sustainable pattern. From 2001-2010 the state saw 51% growth in health care. And that’s not discretionary spending either, he says. The recession would have hit the state much harder without health care as a cushion. Robinson continues to see strong growth trends in health care, with no clear signs of these trends slowing.