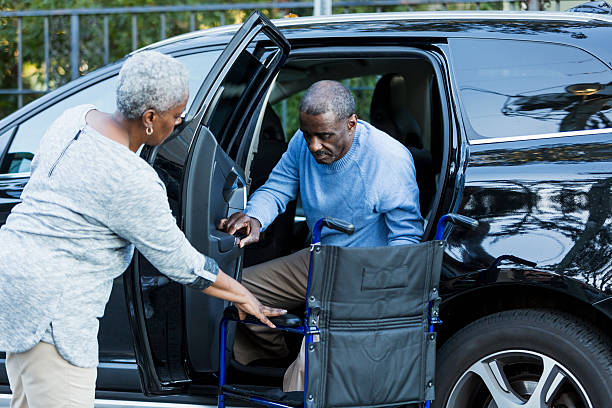 “We have had incidents of consumers who have been waiting after their appointment for up to 8 hours into the evening by themselves,” Hazelbaker said. “These are vulnerable people and nobody likes to be stood up after a doctor appointment. But certainly if you need mobility assistance that’s not going to work well for the future of your health care. It is an entitled service. It’s something people should be able to access fairly readily.”

People who use wheelchairs have been declined rides when requesting NEMTs, Hazelbaker said. Multnomah County resident Johanna Bialostosky falls into that category. She described a situation in Portland in which she was left without transportation—after making arrangements with Ride to Care for a ride following a vision appointment—in August or September last year. She said the driver arrived and checked in with her, but then left unexpectedly.

“He never said a word to us,” Bialostosky said. “Ride to Care never sent anyone for us and had no solutions for us. There have been many more instances I’ve been in where they left or never came. I’ve only been in a wheelchair since last year, and I can’t count how many times this has happened to me.”

Oregon Health Authority (OHA) Director Patrick Allen discussed the organizational process for NEMTs. He apologized to Bialostosky, and said NEMTs issues have been an ongoing challenge OHA officials have been trying to address for a number of years.

“What’s happened to her is unacceptable, and we’re trying to work through that,” Allen said.

Oregon Health Plan (OHP) members use NEMT services, and OHP covers the cost of consumer travel for health care services. OHA coordinates with coordinated care organizations (CCO) to offer NEMTs, but there can be gaps in communication.

“OHA contracts with the CCO, [the CCO] coordinates with a broker, and the broker coordinates with drivers,” Allen said. “Each of those relationships is a place where things can break down, and they do break down. So we’re trying to figure out where those gaps are and trying to plug them is a big challenge.”

“We’re working with the Oregon Department of Justice on issues having to do with systemic racism, particularly around contracting questions, to get to the bottom of whether those are real and whether they constitute Civil Rights violations on the part of contractors,” he said. “We’re trying to do systemic analysis on the complaints to see if we can recommend to CCOs broad steps they can take to deal with this.”

Some options for improvements within the NEMT system could include the implementation of ride-tracking software, closer coordination with CCOs, and cataloging the grievances OHA receives, Allen said.

Rep. Mark Owens (R-Crane) asked if data was available that could give him an idea of which percentage of rides are successful compared to those that are not.

“We don’t have real-time data, but anecdotally the vast majority of rides happen successfully,” Allen said. “The vast majority of CCOs are able to manage this process well. But I think the exceptions are notable, and they’re not a vanishingly small fraction. There are places in the state where the percentage of problems is big enough to be notable and big enough to be a meaningful problem that needs to be addressed.”