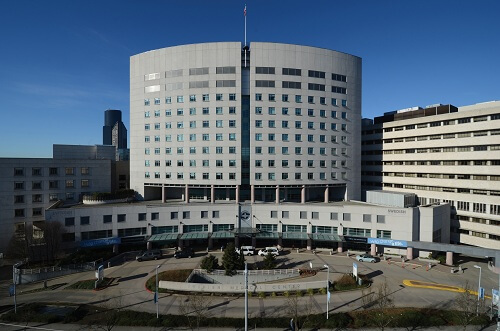 Swedish Health Services is planning on decarbonizing its First Hill flagship campus as part of an effort to become carbon negative across all its facilities by 2030.

Swedish, which is part of Providence, runs five hospitals, more than 120 clinics, and employs more than 12,000 workers. The organizations mapped out a plan to become carbon negative, and the First Hill announcement comes after the Issaquah campus became the first in the network to become carbon neutral for energy use in March 2021.

The First Hill infrastructure modernization project will reduce wasted energy by capturing excess heat using thermal storage devices like hot water tanks, which can be used to heat facilities without using additional energy. At the same time, it will use an ice storage system in the basement of the campus that will help cool the hospital when needed.

It will also use a heat pump set up to run on low-carbon hydro-electric power. The goal is to reduce carbon emissions by 9,000 tons per year for the campus, or the equivalent of removing 1,800 cars from the road annually, according to a press release from Swedish.

The hospital could also eventually partner with neighbors to help heat and cool other buildings. Creative Energy is designing the project, and has undertaken similar projects, including a large-scale one in Vancouver, B.C.

According to Swedish, hospitals are the second-highest consumers of energy, and generate 10% of all U.S. greenhouse gasses and pollution.

The Commonwealth Fund in 2018 reported that the U.S. health care sector emitted 655 million metric tons of CO2 in 2011.

“If CO2 emissions are a barometer of all air pollution, then pollutants associated with the health care sector could be implicated in 10% of the nearly 200,000 premature deaths attributable to air pollution annually in the United States,” the report states.

Swedish joins other health systems as they try to reduce their carbon emissions footprint. Kaiser Permanente, by 2018 according to the Commonwealth Fund, reduced greenhouse emissions by 29% by using solar power.

“Our mission is to improve the health and well-being of each person we serve, and we believe that extends to how we respond to the climate crisis and its enormous toll on human health and the health of our planet,” said R. Guy Hudson, Swedish CEO in the press release.

In August, the Associated Press reported that the Biden administration launched a health office called the Office of Climate Change and Health Equity to work with local jurisdictions to mitigate the impacts of climate change. Part of that work includes pushing hospitals to reduce their carbon emissions.

Washington State legislators are also eying bills to decarbonize buildings in the 2022 session.