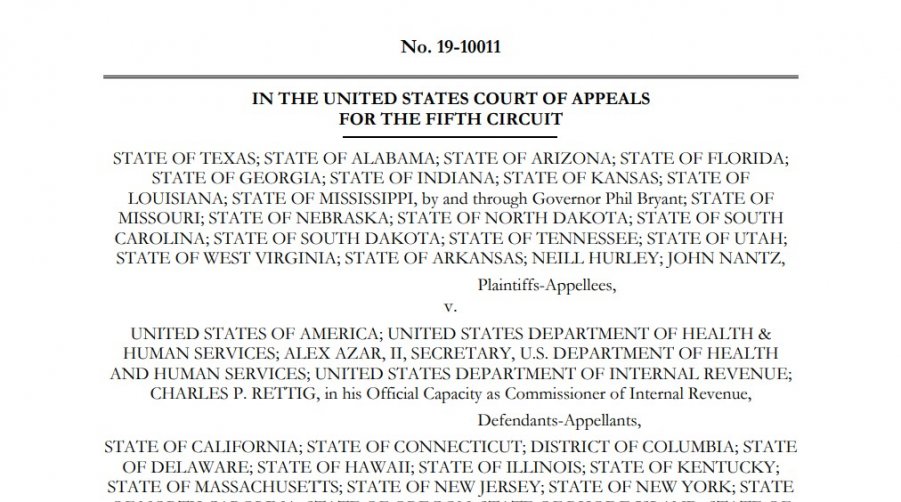 On Wednesday May 1, 2019, initial plaintiff briefs were filed in Texas v. United States, in the U.S. Court of Appeals for the Fifth Circuit. The brief from the United States Department of Justice (DOJ) represents the first look at the Trump Administration’s legal argument after it recently decided to reverse its previous stance and take a position in the lawsuit that seeks to invalidate the Affordable Care Act (ACA).

Prior to March 2019, the DOJ merely declined to defend the constitutionality of the ACA.  However, in the recently filed brief the DOJ now contends that the law should be struck down in its entirety – including the guaranteed issue and community rating provisions that have protected people with pre-existing conditions.

The core of the DOJ’s argument rests on a two-step argument:

Second, the DOJ contends that without the tax penalty that was zeroed out by Congress in the 2017 Tax Cut and Jobs Act, the individual mandate (which the court in NFIB v. Sebelius held sprung from Congress’s taxing power) is beyond the scope of Congress’s power and is unconstitutional. Absent the individual mandate, the argument follows, the rest of the statute is so interdependent that it cannot properly function, is not be consistent with Congress’s objectives in enacting the ACA, and unconstitutional in its entirety. This reverses its argument from last year when the DOJ contended that the majority of the ACA did not depend on the individual mandate penalty and should remain.

“Although the 2017 Congress eliminated the mandate’s penalty while retaining the rest of the ACA, it left in place both the mandate itself and the 2010 Congress’s findings that the mandate was essential to the guaranteed-issue and community-rating provisions—the latter provisions are thus inseverable if this Court holds that the former provision is no longer constitutional,” reads the DOJ’s brief.

Oral arguments in the case are expected the week of July 9 -12 after the DOJ’s request to expedite oral arguments was granted last month. The coalition of Democratic state Appellants lead by California and including Hawaii, Oregon, Washington, and 18 other states will have until May 22nd to file their reply brief in the case.

“The Trump Administration chose to abandon ship in defending the #ACA and the hundreds of millions of Americans who depend on it for their medical care. Our legal coalition will vigorously defend the law and the Americans President Trump has abandoned.”

Expect reply arguments to include challenges to the DOJ’s expanded notion of the plaintiffs’ standing and to the contention that the mandate cannot be severed from the remaining provisions of the Act.