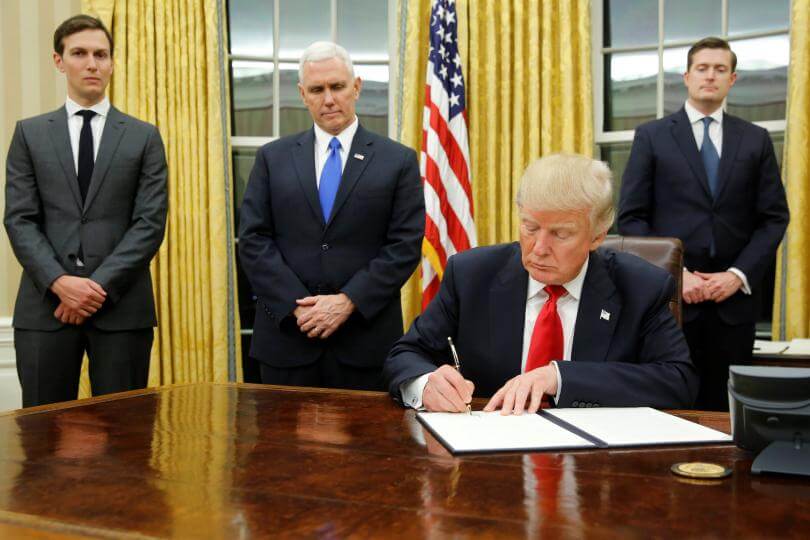 What the Trump-ACA Executive Order Means

The biggest news for the ACA between the election of Donald Trump to the Presidency and the passage of whatever Congress passes as part of “repeal” of the ACA might be the executive order Trump signed on his first day in office.

Quickly after the Friday evening order was signed there were varied takes on what it meant, ranging from a gutting of key elements of the ACA to a more nuanced view that the order amplified rhetorically where a Trump Administration was already likely to go in re-shaping the law.

The best take we found on the issue was a relatively obscure health policy blog  by Nicholas Bagley that can be fairly described as explaining the action as both much ado about nothing and a quite significant policy step. To summarize, the order means two things

First, the anticipated influx of flexibility to the states might be even more profound than anticipated:

The instruction about state flexibility probably relates mainly to Medicaid waivers. Under President Obama, CMS refused to grant waivers that would have allowed states to impose certain types of burdens on Medicaid beneficiaries—especially work requirements, substantial cost-sharing, and time caps on eligibility for non-disabled adults. I expect Trump’s CMS to be more accommodating. I also expect HHS to issue revised guidance expanding the scope of 1332 waivers, which enable states to opt out of the ACA’s regulatory requirements if they devise an alternative.

The Obama Administration approved but one 1332 waiver, to Hawaii. That waiver including abolishing the SHOP (Small Business Health Options Program) in the Aloha State, perhaps the ACA’s biggest dud. If the 1332 waiver remains an option, it may be the broadest vehicle for a state to seek flexibility under whatever remains of the ACA, which could lead to a broad and divergent range proposals from blue and red states alike covering Medicaid, the individual market, and perhaps beyond.

Much more significant, however, is the instruction to “waive, defer, grant exemptions from, or delay the implementation of” any “cost, fee, tax, penalty, or regulatory burden.” This reads like bureaucratic code for “kill the individual mandate by any means possible.” Some of that should be easy: I expect hardship exemptions to be expanded and IRS enforcement of the mandate to fall.

If the IRS “delays” the individual mandate, the insurance markets in many states could go into a tailspin. Rates for 2018 will skyrocket and some insurers could fold. In addition, delaying the mandate would preempt any debate in Congress about whether to keep the mandate in place during a transition period to a yet-to-be-disclosed replacement.

Those significant and potentially disastrous implications for the stability of the individual market were not a foregone conclusion based on the language of the order. A leading White House staffer seemed to have settled that difference commenting on the issue on a Sunday news show:

The Trump administration may stop enforcing the Obamacare requirement that most Americans carry health insurance even before Congress repeals the law, Kellyanne Conway, a top adviser to the new president, said in interviews broadcast on Sunday:

“What President Trump is doing is, he wants to get rid of that Obamacare penalty almost immediately, because that is something that is really strangling a lot of Americans, to have to pay a penalty for not buying government-run health insurance,” Conway, whose title is counselor to the president, said Sunday on ABC News’s “This Week.”

There is a rather clear outcome from all this based on talking to insurers: they will flee the market in 2018. In some states, to avoid the technicality a full market exit, they may remain in a bare minimum of counties, with the narrowest of networks, to mitigate their losses, but the effect on consumers could be profound. Research by the Kaiser Family Foundation already shows a relatively bleak picture with large swaths of the country down to only an insurer (yellow in the below map) or two (blue in the below map) in the individual market by county for 2017: 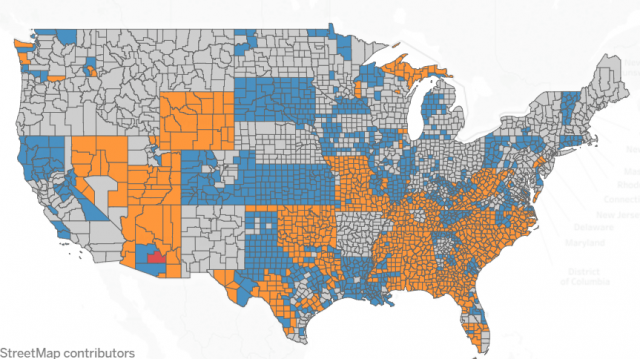 It might be brutally challenging to predict what will come in the months ahead with so much changing in the world of the ACA and health care policy. But, the message publicly reported and that we hear privately from insurers is crystal clear: the individual market is on the precipice of a death spiral in many states.

Pulling the rug out from the individual mandate after insurers were already left holding the bag on billions in undelivered risk corridor funding will leave concerned insurers, already have experienced steep losses in the individual market, feeling like their safest option is exit or dramatically reduced their individual market presence and wait for what comes next after the ACA.

At least in the short-term, that’s a bad deal for consumers who will see premiums soar and choices decrease, and likely not something Members of Congress up for re-election in 2018 will like to see either.