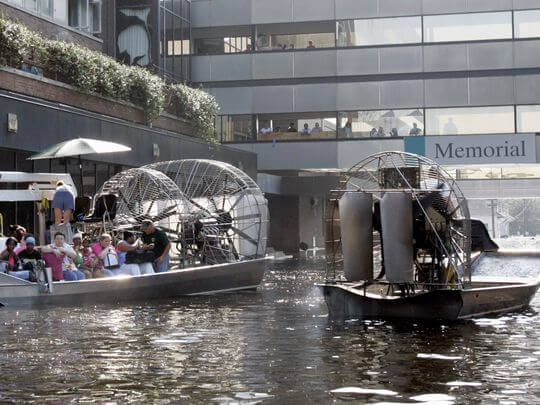 Well, maybe not fully disaster-proof, but better prepared for the challenges of hurricanes, tornadoes, tsunamis, and earthquakes that are a realistic threat in one form or another in much of the United States.

New Orleans has the unique experience of being a major U.S. city to be hit directly by such a disaster when Katrina tore through the city in 2005:

All it took was two feet of water to debilitate the Veterans Administration Hospital in New Orleans in the wake of Hurricane Katrina.

Once the flooding infiltrated the basement-level windows, it destroyed the emergency generators that the entire hospital depended on after municipal power cut out. Life support systems, lights, and heating and cooling were knocked out. At Memorial Hospital, also in New Orleans, an even more dire situation arose involving power failure, the inability to sustain patients in intensive care, and building evacuation. Forty people died there as a result of the storm, igniting a medical ethics debate about how to handle patients in disaster situations.

Much of New Orleans had to be rebuilt or refurbished in the wake of Katrina, a years-long process that had the silver-lining of the creation of new and better infrastructure to serve the metro area. Those learnings have application throughout many areas of the United States that face the threat of natural disaster that could disrupt hospital systems at the time they are needed most:

Hurricane Katrina laid bare the structural deficiencies and vulnerabilities of medical centers. In the New Orleans area, 7 of 16 hospitals with acute care centers remained closed two years after the storm. Architects tasked with rebuilding the facilities were posed with a critical challenge: rebuild the hospitals so that in the event of a similar, or even stronger, storm, the buildings remain fully functional and self-sufficient for days on end.

“It’s unfortunate, but right now the maps where we draw the extent of vulnerable areas are expanding, and areas that weren’t considered vulnerable before, are,” Ryan Hullinger, a principal at NBBJ, says. “These techniques are going to be needed in more and more hospitals.”

The full article makes for an enlightening read on how to prepare for the challenges of natural disaster while keeping a modern hospital up and running.

Are many of the design elements easily incorporated into existing buildings?  Probably not. But, such approaches are possible in some cases while modernizing or expanding existing facilities, in addition to the obvious opportunity of new construction.

Food for thought outside the usual grind of health care today, which is so easily focused on the problem of the day and the currently tumultuous world of health care policy.