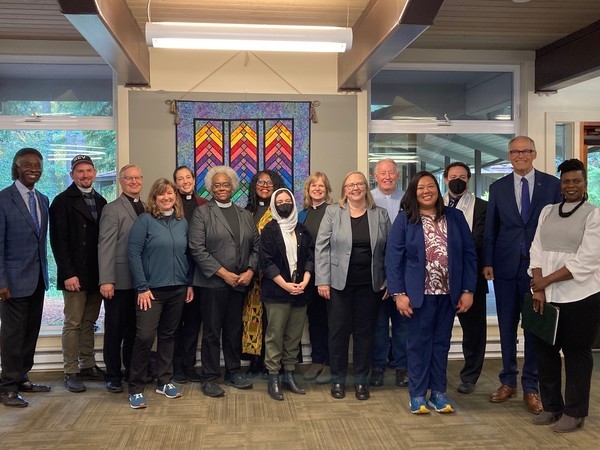 Gov. Jay Inslee and other Washington lawmakers have announced several new policy proposals that will be part of a 2023 legislative package that aims to strengthen abortion access and other reproductive health services in the state.

Lawmakers announced the proposals at Federal Way’s Wayside United Church of Christ on Friday. Rep. Drew Hansen (D-Bainbridge Island) proposed a sanctuary policy that would help protect patients from states with abortion bans from being punished for acquiring health care services in Washington.

Rep. Tarra Simmons (D-Bremerton) discussed a bill that was introduced during the last legislative session that would prevent healthcare consolidation from restricting patient choice. It would require oversight for health system consolidation to ensure that care remains affordable, accessible, and held to a high standard of quality. It would also combat extralegal restrictions imposed by health systems blocking patients from lawful abortion or gender-affirming care.

Inslee demonstrated the importance of establishing the proposed amendment by citing Republican attempts to pass anti-abortion legislation, as well as the US Supreme Court’s (SCOTUS) decision in the Dobbs v. Jackson Women’s Health Organization case.

Thirteen states have enacted bans on all or nearly all abortions in the months since the SCOTUS decision.

Rep. Vandana Slatter (D-Bellevue) discussed her health data bill, which will be a part of the package and would close a legal loophole that allows non-health care organizations to collect, share, or sell private health information. It would also prohibit collecting data on specific locations related to reproductive and gender-affirming care.

“[It] will ensure our health data, information about our private health care decisions, about our bodies cannot be collected or shared without our consent and cannot be bought or sold,” Slatter said. “Most of us expect that our health care data is protected under laws like HIPAA that protect you when you go and see a doctor. However, the reality is that you don’t have the same protections when you share any personal health information in an app or website or searches. This leaves your data vulnerable to being sold or shared with people who may be targeting you.”

Inslee joined the governors of California and Oregon immediately following the Dobbs decision in June to announce the Multi-State Commitment to Reproductive Freedom to defend access to reproductive health care, including abortion and contraceptives. He said $1 million in emergency funding would support Washington reproductive care clinics, and issued a directive to the Washington State Patrol to refuse to cooperate with investigatory requests related to abortion that come from agencies in states with severe abortion limits.

The Northwest Abortion & Gender Justice Coalition recently announced an initiative to install billboards in Spokane and Yakima to inform abortion seekers they are safe in seeking services in Washington. The “Dear Abortion Seeker” signs will be placed near the Idaho-Washington border, a response to the near-total abortion ban that was spurred by the Idaho Supreme Court’s vote that declined to stop a Republican-backed state law criminalizing nearly all abortions in the state following the SCOTUS ruling. The signs are expected to be installed this week.