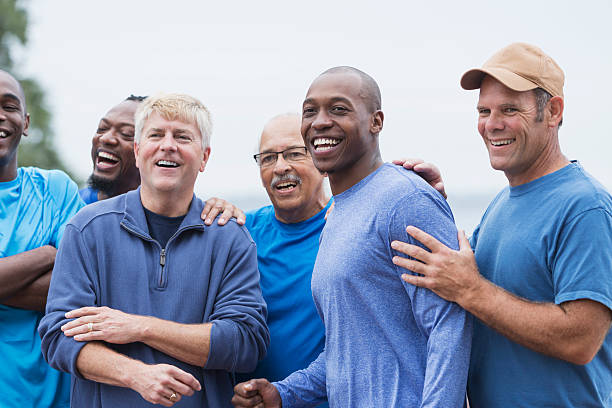 Some men may need to step outside their comfort zones in order to reach a level of health and well-being that can make a positive impact on their families and those they love.

“I’m in therapy evaluating my childhood trauma,” Baldwin said. “I don’t think we talk about that enough. We have normalized childhood trauma. Usually we don’t have a desire to do mental health, we don’t pursue it.”

Baldwin said men can be particularly wary of sharing sexually traumatic experiences, noting  sexual abuse is more prevalent than some men care to admit. Rev. Dr. Leslie Braxton, Senior Pastor at New Beginnings Christian Fellowship in Kent, said boys are almost as likely as girls to experience child sexual trauma. Self-report studies show that 20% of adult females and 5-10% of adult males can recall a childhood sexual assault or abuse incident, according to the National Center for Victims of Crime.

“Men are far less likely to admit sexual trauma,” Braxton said. “We internalize what has happened.”

Some men can feel less masculine or weak when they discuss painful experiences they have had, which is a theme they can learn through societal norms, DOH Secretary of Health Dr. Umair Shah said. And unchecked feelings can provoke negative methods of dealing with pain, including acts of violence, he said.

“There are societal waves occurring where we’re caught up in that,” Shah said. “It is about society. What can we as a society do? Mass shootings … What are we doing to take that on? We have failed to do enough. We’re not doing enough for our generation. What are we teaching our sons? What are we doing to prevent them from reliving trauma we ourselves have had? Shame on us if we cannot do more when we know those things are impacting the very people we care about.”

“People live in communities where there’s food deserts,” Braxton said. “Because of their address they can’t get to where the quality of food is better. Are we going to make healthy living possible? We have an obesity crisis in general. Sixty percent of our young people can’t pass a fitness exam. We brought fast food into schools. We’re becoming more unhealthy every single day.”

Baldwin said capitalism can play a negative role in men’s health as well.

“It’s simple supply and demand,” Baldwin said. “I don’t care about the bottom line. It shouldn’t be the end all be all. We don’t look at human beings as human beings. We look at them as vehicles for production. Our entire system of government was set up this way from the beginning.”

America’s health care system is in need of change, Braxton said, noting that many men can’t afford to pay for the care they need.

“This nation has to have health care that covers all,” Braxton said. “That’s not socialism. It makes economic sense if we provide health care as a right.”

“That was a catalyst for me,” Baldwin said. “It is imperative that I’m focused on my overall health so I can be everything my wife and daughters need.”